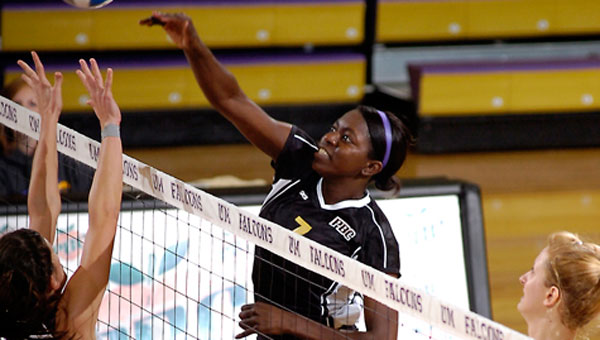 University of Montevallo redshirt freshman Manyi Ati, who was recently named the Peach Belt Conference's Freshman of the Year, helped lead the Falcons back to the NCAA Division II tournament for the first time since the 2000 season. (Contributed)

Despite the loss in the conference tournament, Montevallo (23-12) received an at-large berth in the National Collegiate Athletic Association Division II tournament for the first time since the 2000 season.

The Falcons, who are the No. 5 seed in the Southeast Regional, will face No. 4 seed Lincoln Memorial in the quarterfinals Nov. 19 on the campus of Wingate University in Wingate, N.C.

Armstrong opened up the contest hitting very well in a relatively easy first-set win, claiming 13 kills and just one error in 28 attacks for a .429 hitting percentage. After a second-set win, however, Montevallo climbed back into the match as the Falcons scored the first eight points of the third set – seven on junior setter Anna Garrison’s serve – and held on for the four-point third set win.

The Pirates were two points away from claiming the match in the fourth set as a Gwen Clarke kill put Armstrong up, 23-22, but Montevallo pushed it to a fifth set on a kill by Virginia Clay and a solo block by Peach Belt Conference Freshman of the Year Manyi Ati.

The fifth set stayed even until a solo block by Amanda Jones gave the Pirates a two-point lead, 11-9. Back-to-back kills by Jones and Jessica Santaniello earned the Pirates four match points, leading 14-10, and finally Jones ended the match with a kill at 15-12 to send the Pirates to the championship match.

Ati finished the match with 14 kills and six blocks, while Clay and Rebecca Dowd each notched 12 kills.

Montevallo was led by freshman Chapman, who had 23 kills and 10 digs good for a double-double. Junior Rachel Wotitzky made her first start as the libero for the Falcons and had a career-high 31 digs.

Dowd added 12 kills and 17 digs while Clay had 12 kills. The final Montevallo player with double-digit kills was Ati, who had 10 kills.

Garrison had 58 assists and 14 digs for another double-double.

The Falcons were awarded four spots on the All-Peach Belt Conference teams this season. 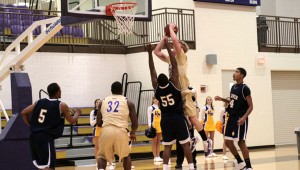 University of Montevallo senior Ronald Severtsgaard drives to the basket in the Falcons' 78-53 win over Carver Bible College in their season opener Nov. 13. (Contributed/Dawn Rasco)

The 24th-ranked University of Montevallo men’s basketball team opened up the 2010-2011 season Nov. 13 with a 78-53 victory over Carver Bible College.

Montevallo (1-0) was led by junior Miles Beatty, who had 17 points including two shots from 3-point range. Senior Ronald Severtsgaard controlled the post with 16 points on 7-of-10 shooting and nine rebounds.

Junior DeMarcus Catchings scored 13 points and grabbed seven boards. Catchings provided the biggest highlight of the game late in the first half as he drove the basket and threw down a tomahawk dunk in traffic. Catchings finished 6-of-9 from the floor and led the team with a pair of blocked shots.

Sophomore Jonas Brown added seven points and seven boards as he was 3-of-5 from the floor. Brown also had a team-high three steals.

The Falcons began the game with a 13-0 run and never looked back as they led by double-digits the rest of the game. Seven of the Falcons’ first 13 points came from Beatty, who opened the game with a 3-pointer.

Montevallo led by as much as 25 points in the first half before ending the half with a 50-28 lead.

The Cougars never got within 20 points of the Falcons in the second half.

The Falcons fell 70-56 on the road at Division I opponent University of Louisiana-Lafayette in their exhibition opener Nov. 9.

Beatty led Montevallo with 16 points on 6-of-12 shooting, including 3-of-5 from beyond the arc.

The University of Montevallo women’s basketball team opened up the 2010-2011 season Nov. 12 under new head coach Mechan Vanderpool with a 56-42 to the University of West Georgia on the road.

The Falcons (0-1) were led by senior Jessica Collins, who had team-highs in points and rebounds with nine and seven, respectively. Senior Carrie Parrott chipped in eight points and five boards.

Sophomore Trena Moore-Smith was 2-of-3 from 3-point range and ended the game with six points and six rebounds. Junior Tiffany McClure and senior Tiaren Young chipped in five points each.

It was a back-and-forth game for the opening 15 minutes, but with just 4:54 to play in the first half, the Wolves went on an 8-3 run to close out the period with a seven-point lead.

Just five minutes into the second half, the Wolves used a 9-0 run to break the game open and take a double-digit lead. The Falcons were only able to close the gap to single digits once the rest of the game.