Joyful Stitchers knit for those in need 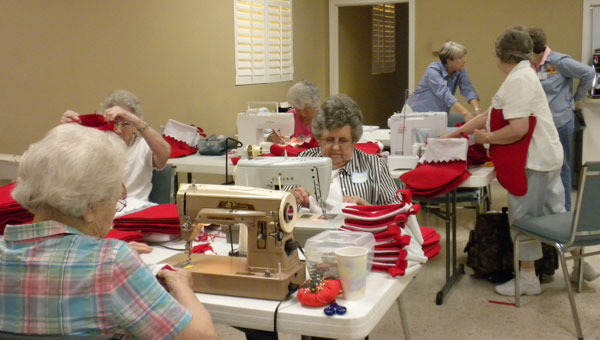 About four years ago, a small group of friends at the First Baptist Church of Alabaster got together to enjoy one of their favorite hobbies while making a few items to donate to those in need.

Although they never envisioned the group growing into a regional ministry, God had different plans in mind, said Carol Collins, a charter member of the church’s Joyful Stitchers group.

“We never set out to start a ministry. Someone donated some material to us with the understanding that we would make some dolls and give them away,” Collins said. “We thought we would do a few dozen items and be done with it, but we are still doing it today.”

Nearly every Thursday, between 12 and 25 church members gather at the nearby Nall House to knit and stitch a variety of items from hats to baby booties to donate to those in need throughout the Birmingham metropolitan area.

Every item the Joyful Stitchers create is donated to local nursing homes, charities, members of the church and others who request their handmade knitted goods.

“We still do a lot of dolls, but we also do bags for walkers, diaper bags for Sav-a-Life Shelby, hats and things like that,” Collins said. “Most of what we do goes to Sav-a-Life or to local nursing homes. Sometimes we give them to individuals or make items that are used in church.”

One of the group’s most popular items is the “wrapped in prayer quilt,” which the group donates to those battling cancer or another long-term disease, Collins said.

“Our wrapped in prayer quilt goes to someone who has cancer or another long-term disease,” she said. “We put a little saying on the quilt to remind them that they are wrapped in prayer and that we care for them.”

Most members of the Joyful Stitchers are members of First Baptist Church of Alabaster, but the group also draws members of other area churches, she said.

Nearly every item the group donates comes with a note explaining the path to God’s salvation, which helps the recipients with their spiritual lives, Collins said.

“Almost every gift we send out has a card with the path to salvation on it,” she said. “They may have a spiritual need that they may need to address, and we hope that we can help them with that by placing that there.”

Because the group works closely with charities and nursing homes, the items also serve other needs.

“We have discovered from the nursing home patients that they are thrilled to get anything,” she said. “For them, it’s more about the attention than the actual item.

“Some of the Alzheimer’s and dementia patients really enjoy the dolls. A lot of them will cuddle them just like a baby,” Collins added, noting the group also makes clothing for families in need, which is distributed through the church’s food ministry.

Through its Pregnancy Resource Centers in Pelham and on U.S. 280, Sav-a-Life Shelby works to help and minister to individuals and couples facing unexpected pregnancies. By knitting diaper bags and baby booties to give to the centers’ clients, the Joyful Stitchers help the parents-to-be prepare for their children, Collins said.

“We give those baby booties to them during their pregnancy to help them realize that is a real child they are carrying,” Collins said. “We hope that saves the life of a child that may not otherwise have been born.”

The Joyful Stitchers rely heavily on monetary and material donations to continue to make and donate their items, Collins said.

Anyone interested in joining or donating to the group should call Collins at 663-3307, or e-mail Carol1st@bellsouth.net.