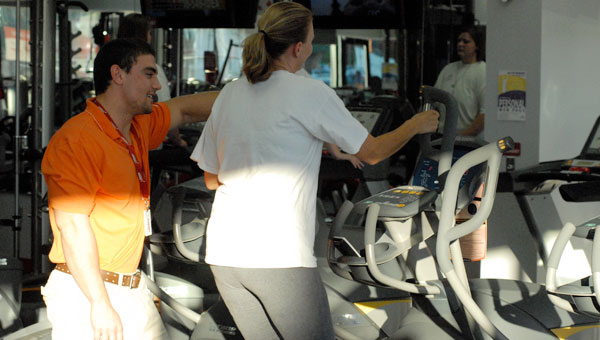 Travis Grandy, club manager of Snap Fitness in Columbiana, has a conversation with a customer as she works out Nov. 17. (Reporter Photo/Davis Potter)

If local residents were looking for a place to shed a few pounds and whip themselves into shape, they don’t have to look any further than 208 W. College St. in Columbiana.

That’s the address of Snap Fitness, the city’s newest and only full-service gym.

Snap Fitness, which is complete with workout machines, free weights, elliptical machines, treadmills and a tanning room, opened Nov. 8 and has already seen a larger-than-expected turnout.

Regional manager Cory Lyons said the gym’s membership goal for November was 100, a number that has already been surpassed.

“We’ve already done more than what we projected,” Lyons said. “We had a really good response from the get-go and signed up a lot of members even before we opened.”

The Columbiana location, which is a corporate-owned gym, is the company’s fourth fitness center to make its way to Shelby County. The county’s first Snap Fitness opened in Calera in 2007 with Chelsea and Helena sites following shortly thereafter.

“We just looked at the demographic and saw that it would be a good fit here,” Lyons said. “There’s really not another fitness center close by. In close by, we mean 10 miles or 15 miles. It’s just a great location.”

Lyons said he’s confident the business will provide healthier lifestyles for residents and aid in cutting down on the state’s 31-percent obesity rate in 2009, which was the seventh-highest rate in the country, according to the Centers for Disease Control and Prevention.

“You see those numbers, and then you can also look at the fitness centers. They can kind of go hand-in-hand,” Lyons said. “The numbers are high, but there’s no fitness centers.

“There’s no direct science to it,” added Lyons, who pointed out that Hawaii has shown to be one of the healthiest states in the country despite not having many gyms. “I don’t really know if those numbers correlate or not. We saw a great fit to come here, and we jumped on it. This is a business that could ultimately change lives.”

Each new member has the opportunity to go through an orientation session, where each person is shown how to properly use the equipment. Members are also given a workout plan based on their needs.

“Everybody is different,” Lyons said.

Lyons said the gym also offers an online training center, where members can lay out their own workouts and develop a meal plan.

Snap Fitness also provides members flexibility with its 24-hours-a-day operation. After signing up, members are issued an access card that can be used to unlock the gym’s door at any time.

Lyons is also hopeful the addition of a new business can provide a boost to the local economy.

“(Columbiana) is a county seat, so there’s a lot of commerce,” Lyons said. “Any business that pays taxes stimulates the economy.”

“It’s great when I can point people in the right direction and get them started,” Grandy said. “People that work out generally feel better about themselves. A lot of people are ready for this.”