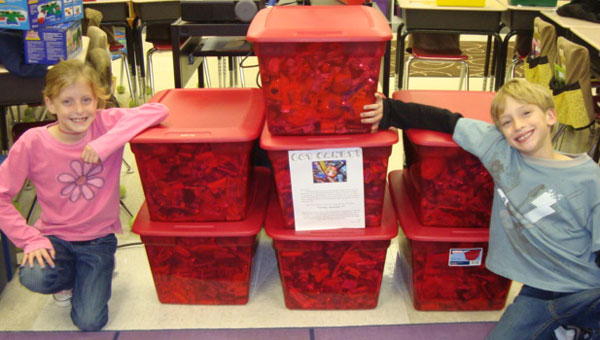 Students in Jennifer Ensley's first grade class at Greystone Elementary, show off the candy the collected.

GREYSTONE — One first-grade classroom presented an easy way for parents to get rid of leftover Halloween candy this year, while at the same time helping those in need.

Students in Jennifer Ensley’s first grade class at Greystone Elementary organized a candy drive to collect treats to donate to the local Ronald McDonald House, which houses parents and siblings of seriously ill or injured children.

Ensley said the idea for the candy drive began when she was trick or treating with parents and students. Ensley discovered one of her student’s family had stayed in the RMH while their premature twins were in the hospital.

The Monday after Halloween, Ensley said she discussed the needs of the RMH with her students.

“I told them ‘How would you feel if you couldn’t go trick or treating or be with family on Halloween?’” she said.

The students eagerly volunteered to share their candy with families at the RMH and the candy drive began. The students asked Ensley if she could send an e-mail to all the parents asking for candy donations, she said. Two days after sending the e-mail, the class had collected four large tubs of candy.

“These kids were bringing in their own candy,” she said. “They were so selfless. They just gave. They had no incentive other than helping others in need. That’s what I found so amazing. Six- and 7-year-olds don’t give up candy easily.” 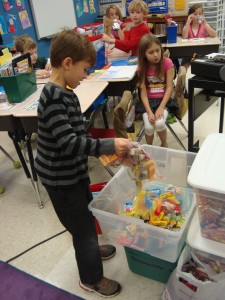 Students donated their own Halloween candy to the Ronald McDonald House.

Next, the class sent an e-mail to the entire school asking for more candy donations, Ensley said.

“What started as just a small class project became a school-wide service project,” she said.

While the candy donations poured in, Ensley said she decided to make use of the collected treats by putting them in her lesson plans. Over the course of several days, the students learned math problems by adding and multiplying candy donations, learned the autobiography of Milton Hershey and received a geography lesson on Hershey, Pa.

“Of course when they had something real to connect it to, learning came alive,” Ensley said. “What I found remarkable was that the candy was stored in my classroom for about a week and not one child asked for a piece of candy during that time. It’s hard for them sometimes to see outside themselves but with this project, they did.”

Ensley said the administrators of the house were happy to receive such a large candy donation since they usually run out of candy within days.

The students also received a tour of the facility and decided on their next service project for the RMH – cooking a homemade dinner for its residents.

Ensley said the candy collection was such a success she plans to do it in her classroom every year.

“It’s a life lesson they can carry with them — to help others in need,” she said. “That’s more important than anything I could teach them out of a textbook.”

By NEAL WAGNER / City Editor Pelham officials will donate $129,416 to the five public schools in the city during... read more