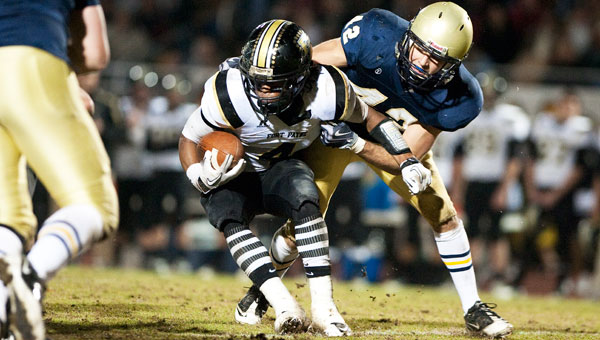 NORTH SHELBY — A common belief in sports is the competition only gets tougher as a team advances deeper in the playoffs.

Not so much for the Briarwood Christian School football team.

Briarwood (12-1) scored the game’s first 30 points and cruised to a 30-7 victory over Fort Payne High School at Lions Pride Stadium Nov. 19 in the quarterfinals of the Alabama High School Athletic Association Class 5A playoffs.

The Lions punched their ticket to the semifinals, where they will travel to Hartselle High School (12-1) on Nov. 26 with a trip to the Class 5A championship game on the line. 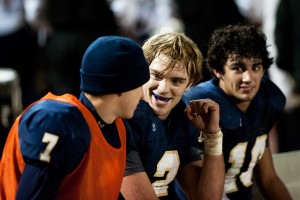 While the Lions made easy work of Fort Payne, Briarwood head coach Fred Yancey didn’t necessarily see it that way.

A good sign for Briarwood fans is the defense seems to get stronger with each win, as the unit gave up 76 rushing yards and allowed one touchdown while forcing five Wildcat turnovers. Briarwood has surrendered just 21 points in its first three playoff games.

“Our defense was really the key,” Yancey said. “Our defensive line was just so quick tonight that it gave them trouble with their run game. Then, when (Fort Payne quarterback Kyle Crabtree) tried to throw, sometimes it was under a lot of duress.” 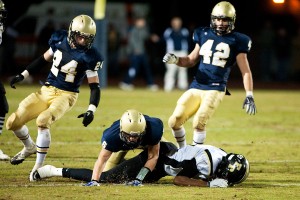 Briarwood's Matthew Furuto gets up after laying a hard hit on a Fort Payne receiver during Friday night's game. (Reporter Photo/Jon Goering)

While Briarwood kept the Wildcats’ offense in check, the Lions’ offense gave its defense plenty of cushion.

Craft got the scoring started with a 50-yard touchdown pass to Daniel Robert on the Lions’ first possession of the contest to stake an early 6-0 lead with 8:34 left in the opening quarter.

Two second-quarter touchdowns — a Craft run around right end from 8 yards out and a 32-yard touchdown pass from Craft to Tanner Cunningham down the left sideline — stretched Briarwood’s lead to 20-0 heading into halftime.

The Briarwood defense got the ball back for its offense when linebacker Tom Muir Taylor intercepted a Crabtree pass and returned it 43 yards to the Fort Payne 26-yard line.

The Lions cashed in on the short field, as running back Sam Whitaker scampered into the end zone from 11 yards out a few plays later to increase the lead to 27-0 with 5:45 left in third quarter. Whitaker had 10 carries for 45 yards and a touchdown. 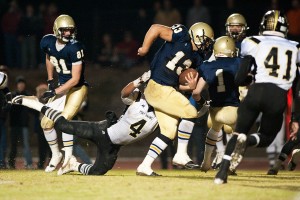 “We got coached up all week, had a good game plan coming in and we just executed it,” Craft said. “We didn’t turn the ball over, and that just helped us out. We just ran our offense.”

The Wildcats got on the scoreboard with 4:05 left in the fourth quarter when Crabtree shoveled the ball forward to running back Akeem Appleton for an 8-yard scoring toss. The play capped a 53-yard drive.

Crabtree completed 23-of-39 passes for 187 yards with one touchdown and five interceptions while adding 42 rushing yards on 16 carries. Appleton had eight carries for 15 yards and hauled in a game-high 11 catches for 78 yards and a touchdown.

The late score was the lone bright spot offensively for the Wildcats.

“(The Briarwood defense) may be the best,” said Fort Payne head coach Paul Ellis, who saw his team suffer its first loss of the season. “If they’re not, they’re in the top 2. They’re so sound, and that’s a credit to their coaches. They don’t make a lot of mistakes, they’re never out of position and they run well.”