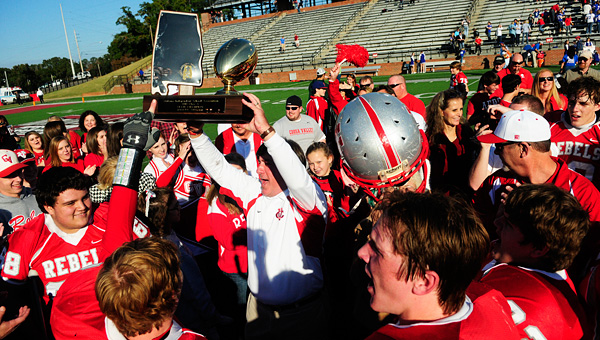 Week in, week out, Bullen and several of his teammates persevered through the bumps and bruises associated with playing high school football.

The physical pain Bullen and his teammates endured all paid off Nov. 18 in front of several hundred Coosa Valley Academy faithful at Veterans Memorial Stadium on the campus of Troy University following the Rebels’ 35-20 win over Sumter Academy in the Alabama Independent Schools Association Class A championship game. 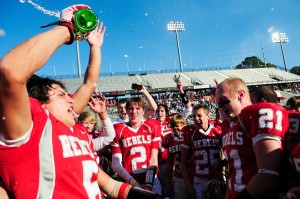 Bullen said the injuries battered the bodies of the Coosa Valley players, but they didn’t impact what was most important.

“The heart of this team is tremendous,” said Bullen, who threw three touchdown passes, rushed for a touchdown and recovered a fumble in the end zone in the Rebels’ victory.

Bullen was certainly the heart of the Coosa Valley team. The senior capped his football career at the school by completing 15-of-30 passes for 205 yards and three touchdowns. Bullen also rushed for 85 yards and a touchdown on 20 carries. 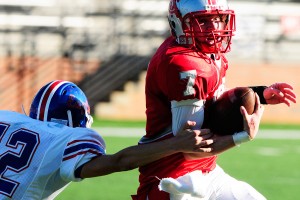 “John is definitely the most valuable player of this football team,” DiLorenzo said. “Every coach we played against said he was the best player they had seen all season.”

Bullen got the Rebels on the scoreboard early after recovering a Sumter Academy fumble in the end zone on the first play from the line of scrimmage. Cody Garrett added the extra point to give Coosa Valley a 7-0 lead.

The Rebels pushed their lead to 14-0 when Bullen found Sam Bullard open for a 12-yard touchdown early in the second quarter. Garrett kicked the extra point. 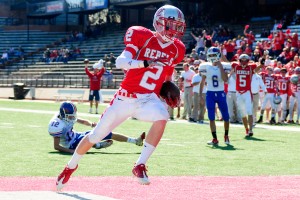 Sumter Academy put its first points on the scoreboard following a 2-yard touchdown run by Paul Reed, which cut the Coosa Valley lead to 14-6 after a failed 2-point conversion attempt.

Coosa Valley scored two touchdowns late in the second quarter to extend its lead to 28-6 heading into the locker room at halftime. Wood reeled in touchdown receptions of 15 yards and 22 yards from Bullen and Garrett was successful on both point-after attempts. 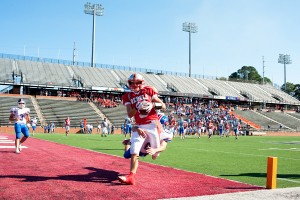 Coosa Valley receiver Tanner Wood gets into the endzone before a Sumter defender could take him down during the state championship game on Nov. 19. (Reporter Photo/Jon Goering)

Sumter Academy scored two touchdowns in the second half to cut the Rebels’ lead to 28-20 with 8:10 remaining in the contest. Reed scored touchdowns on a 60-yard run and a 1-yard run, and Reed ran it in for the 2-point conversion following the second score to cut the lead down to a touchdown.

Coosa Valley responded with Bullen leading the Rebels on an eight-play, 61-yard championship-sealing drive. Bullen ran twice for first downs during the drive and capped it with a 4-yard touchdown run to give the Rebels’ a 35-20 lead with only 3:40 left on the clock.

DiLorenzo said the Rebels looked back to a 2009 playoff win over Restoration Academy for motivation in the final minutes.

“I thought to myself, we need a Restoration drive just like we did that night to seal the win,” DiLorenzo said.

DiLorenzo, who won two Alabama High School Athletic Association championships during his time as head coach at Gadsden High School, said the championship was the culmination of a five-year project at Coosa Valley Academy. DiLorenzo had one pledge when he accepted a position as an assistant coach at the school in 2006.

“We’re going to make football important again,” DiLorenzo recalled as his words back then. “In five years, this program is a state champion.” 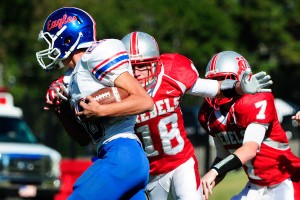 Bullen, who transferred to Coosa Valley Academy from Childersburg High School and was also part of the Rebels’ AISA Class A championship team in the spring, said winning state titles is quickly becoming a school tradition.

“It’s a great experience to be a part of winning teams,” Bullen said. “At CVA, it’s what we’re about. We expect to be good at everything we do.” 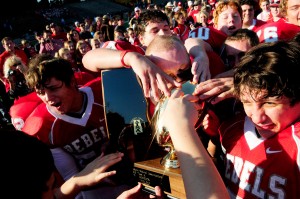