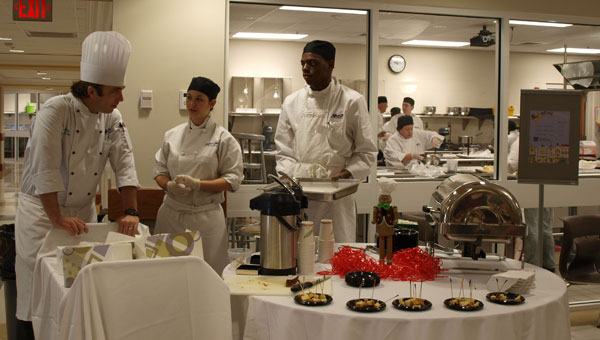 HOOVER — Shelby County residents have the opportunity for a one-stop shop at the Jefferson State Community College Christmas Village Nov. 30, with food and gift items available for sale.

Jeff State instructor Libby Holmes, who helps organize the event, said those who put on the event mean it to be a fun day for all who come.

“We think of it as our gift to the community, and in addition to having the vendors there for the community to come and shop, we’re highlighting organizations in the Shelby County area and nearby that people can get involved with as far as donations and volunteer work,” Holmes said.

In addition to more than 70 vendors selling items such as arts and crafts, purses, jewelry, children’s clothes and more, the event will feature charitable organizations such as the Shelby County Humane Society and local Boy Scout troops. Holmes said donations such as cat litter, dry cat food, bleach, newspapers, Dawn dishwashing liquid and laundry detergent are needed for the Humane Society.

Holmes said she hopes to see 300-400 people come to the event, which will benefit the Jeff State culinary arts program.

“They will be making their fabulous cinnamon rolls,” she said.

While Holmes said she doesn’t expect the event to raise a lot of money, she said that’s not the point of the event.

“I think we’ll probably raise about $1,000. It’s not a huge fundraiser, but it’s mainly something we do for the community,” she said. “We have several assisted living facilities that bring their residents. That’s another reason we do it. It’s just a fun outing for their residents. They get to eat lunch, walk around, do their shopping and talk to people from the community.”

The Christmas Village will be from 7:30 a.m.-3 p.m. at the Shelby-Hoover Campus Health Science Building, located at the corner of Jaguar Drive and Valleydale Road.