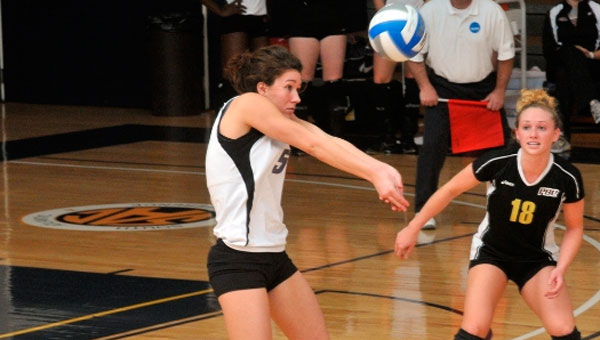 The University of Montevallo volleyball team picked up its first National Collegiate Athletic Association Division II tournament victory following a 25-15, 9-25, 26-24, 25-20 win over Lincoln Memorial University in the opening game of the Southeast Regional on the campus of Wingate University in Wingate, N.C.

Montevallo (24-12) was led by freshman Taylor Chapman, who recorded a double-double with 10 kills and 11 digs. Chapman also chipped in two blocks.

The fifth-seeded Falcons jumped all over the No. 4 seed Railsplitters in the first set, leading almost the entire way as Montevallo won 25-15. It was the exact opposite in the second set, as the Railsplitters dominated play and won 25-9.

After the first two sets, both teams settled in for quite a battle in the third set.

Lincoln Memorial jumped out to a quick 5-0 lead off the serve of Lia Bevins. A kill by Ati opened the door for the Falcons, as they fought their way back into the match and cut the lead to 6-5. The set continued to bounce back and forth over the next several points with both teams gaining small leads. Down 22-18, the Falcons made a big push and took a 24-23 lead as sophomore Virginia Clay provided a pair of kills to go with a number of Lincoln Memorial attack errors to take the lead.

The Railsplitters tied the set at 24-24, but a service error and a bad set gave the Falcons a 26-24 win in the third set.

The fourth set was another tough battle, but the Falcons pulled away late winning 25-20 and advancing to their first NCAA Division II regional semifinal. Montevallo will take on top-seed Wingate University on its home court Nov. 20 with a trip to the Southeast Regional championship championship match on the line.

The Falcons are making just their second NCAA Division II tournament appearance since joining the association in 1996. The Falcons’ last NCAA tournament match came during the 2000 season, where the Falcons were swept by Arkansas Tech in the first round.