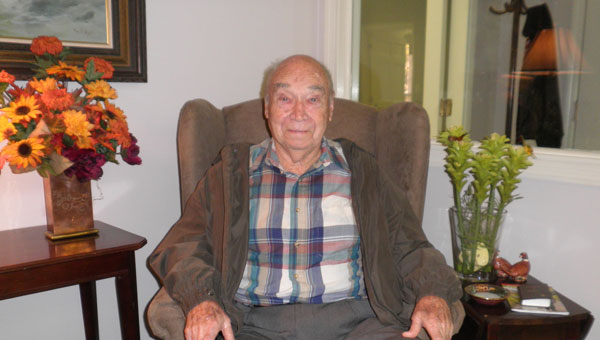 Former Mayor Jefferson Dowell “Buck” Falkner will be the grand marshal of the Columbiana Christmas Parade on Saturday, Dec. 4, at 1 p.m.

“There were no paved streets, no electric lights and no running water,” said Falkner.

Falkner graduated from Shelby County High School in 1938. When he was a senior he met the love of his life, sophomore Lorene Juzan.

“Lorene and I were buddies,” said Falkner. “We loved to fish and have fun. She was a beautiful woman and a talented artist.”

Lorene and Falkner were married on Dec. 24, 1941, during World War II. He served in the Air Force for two years. After returning to Columbiana, Falkner became head of the Shelby County Farmer to Market Road Program and built roads all over Shelby County. He was treasurer of the Alabama National Gas Association for eight years. Then to his wife’s urging, the Falkners opened Eagle Department Store and Falkner’s Department Store. He is now in the real estate business.

“We are a close family,” said Falkner.

Lorene Falkner spent her last four years living at Shangri-La, where Falkner loyally visited her every day. He was devoted to his beloved wife. He remembers his last conversation with her.

Those were Miss Lorene’s last words to her husband of 67 years. She died the next day in 2008 of a massive heart attack.

Falkner devoted 33 years of service to Columbiana. He was a city councilman for 20 years, city superintendent for five years and mayor for eight years. It was during his term as mayor that the Christmas Parade was started.

Columbiana honors Buck Falkner as grand marshal for his life of service to Shelby County.