Español on the airwaves 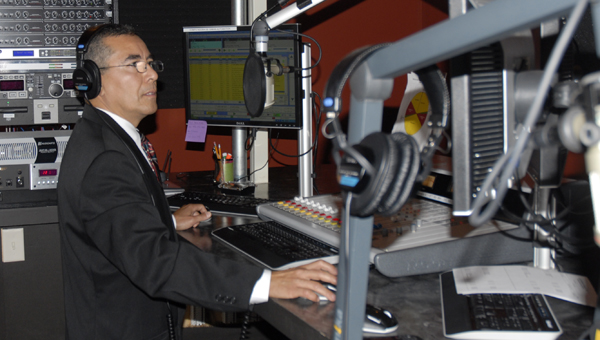 Adolfo Arana, dressed in a black suit and a red and green tie, laughed and bobbed his head as he placed his hand on a pair of padded headphones and adjusted the settings on the soundboard in front of him.

Projecting from the speakers hanging in the corners of the small, soundproof room were short newscasts detailing events from California to Alabama, commentary from local citizens and callers from across the nation.

Although the airwaves have been flooded with similar radio stations for decades, Arana was broadcasting something Shelby County has never experienced.

Everything coming through the studio was filling thousands of radios in Central and North Alabama with a language many stations do not feature.

“We are excited to be the first radio station in Pelham, and the first Spanish-language station,” said Theresa De Leon, spokeswoman for Rivera Communications. “We have a large number of Hispanic listeners in Shelby County, and they will now be more involved in national and local news and issues.”

Rivera Communications, which is based in Pelham and owned by Joel and Isabel Rivera, who also own the Mi Pueblo Supermarket in Pelham, Homewood and Clanton, celebrated its grand opening Nov. 22 in a small building off Yeager Parkway.

The radio station, which is named La Jefa, meaning “leader,” broadcasts simultaneously on 1500 AM in Alabaster, 1450 AM in Bessemer and 620 AM in Lexington. Together, the stations cover much of the state, said De Leon.

In addition to coverage of local and state news, the station will also feature community announcements from Alabaster, Pelham and much of Shelby County and the Piolín por La Mañana syndicated morning show.

Because the station broadcasts to thousands of Latino residents in Shelby County, it will help them to know more about local and national events, said Isabel Rubio, executive director of the Hispanic Interest Coalition of Alabama.

“The establishment of this radio station is critical to help Latinos be educated about their new communities,” Rubio said. “It’s an incredible public service, and it’s exceptionally important in terms of moving the community forward.”

By having a Spanish-language form of mass communication in the area, leaders in cities like Pelham, Hoover and Alabaster will be able to more easily distribute messages to the Latino population, said Pelham Mayor Don Murphy.

“It’s great to have this in our city,” Murphy said. “It will help Latinos to know more about what is going on and be more involved in the community, which is great.

“Used to, the schools were the only way we could get the word out to them. We want them to be involved in their city. That’s a good thing,” Murphy added. “It’s great that we have another way to reach the community and help our community grow.”