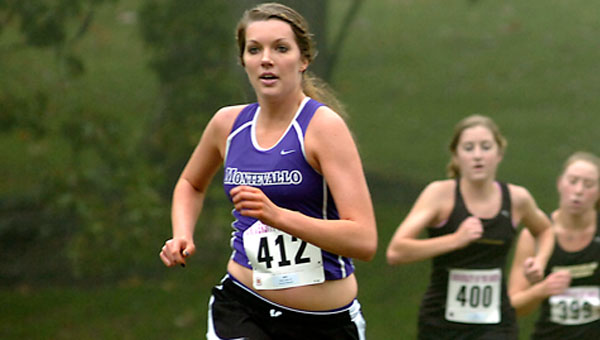 University of Montevallo senior January Waters capped her cross country career at the school by helping the Falcons finish in the top 15 in team standings at the NCAA DIvision II Southeast Regional meet Nov. 20 in Charlotte, N.C. (Contributed)

Sophomore Haley Evans led the Falcons as she finished 54th overall in individual standings with a time of 24:38.30. Junior Katherine Schofield came in one spot behind Evans at 55th overall with her time of 24:39.60.

Freshman Mark McDonald led the Falcons as he finished 76th overall in individual standings in the 8K race with his time of 34:54.60.

The University of Montevallo men’s basketball team downed region opponent Anderson University, 79-75, in its second game of the season Nov. 20.

The Falcons (2-0) were led by junior Miles Beatty and junior Antoine Davis.

Beatty had a team-high 18 points off of five 3-pointers and a 3-of-4 performance at the free-throw line. Davis added 17 points, four assists and four steals. Davis led the team with seven free throws as he went 7-of-10 at the charity stripe.

Senior Demarcus Richard contributed 12 points and was 5-of-8 from the field, including 1-of-2 from 3-point range. Senior Cecil Coleman was the only other player in double digits with 10 points and five rebounds.

The Trojans opened up the game with a 4-0 run, which set the pace for the rest of the first half as the Falcons played from behind the entire 20 minutes.

Up by four points with 9:59 left in the first half, the Trojans went on a 13-4 run to take a 13-point lead with just 6:57 left in the period. Montevallo immediately responded with a 12-1 run, capped by five-straight points from sophomore Jonas Brown.

The Falcons cut the lead to just two points late in the first half before a jumper by the Trojans with three seconds left gave Anderson a four-point lead heading into intermission.

A pair of free throws and a jumper from Davis just minutes into the second half tied the game at 36-36. Just 30 seconds later, the Falcons took their first lead of the game as Brown hit another 3-pointer to give Montevallo a 39-37 lead.

Anderson tied the game at the 6:41 mark at 58-58, but that would be as close as the Trojans would get the rest of the half. The Falcons went on a 7-0 run, powered by 3-pointers from Beatty and Richard, late in the second half to give Montevallo a 74-66 lead with just 2:06 to play.

Montevallo hit its free throws down the stretch and held off the Trojans.

The University of Montevallo women’s basketball team picked up its first win under first-year head coach Mechan Vanderpool in an impressive 88-59 victory Nov. 15 on the road at Clark Atlanta University.

Junior Taylor Welch scored 15 points off of five 3-pointers, as she was 5-of-7 from long range. Junior Tiffany McClure added 12 points and six boards, while hitting 5-of-8 from the floor. The final player in double figures was junior Shavonne Seymore, who had 11 points off 4-of-7 shooting.

Montevallo dropped both games Nov. 19-20 in the University of West Florida Classic in Pensacola, Fla.

Following the loss to host West Florida, senior Kris Seigenthaler was named to the All-Tournament team as she scored eight points and grabbed a pair of boards in the finale Nov. 20. Parrott also had eight points to go along with five rebounds.

Harris added seven points and six boards, while Collins and Seymore led the team in rebounds with seven each. Seymore also had five points.

West Florida shot just 30.9 percent from the floor, but pulled away in large part to a big advantage in the free-throw department. The Argonauts were 21-of-32 from the charity stripe, while Montevallo was just 7-of-12.

A late comeback by Montevallo fell just short Nov. 19 in the loss to Rollins College. The Falcons were led by Collins and Welch, who each had 12 points.

Collins was 4-of-7 from the floor and a perfect 4-of-4 at the charity stripe. Collins also had a team-high six boards and four assists. Welch shined from downtown once again as she was 4-of-7 from long range.

Seymore chipped in nine points, while Seigenthaler added eight points. Seigenthaler was a perfect 4-of-4 from the free-throw line.

Three members of the University of Montevallo men’s soccer team were recently named to the Daktronics All-Southeast Region first team.

This is the first Daktronics All-Region award for Foster and McIntosh. It is the second award for Pualic, who was named to the All-South Region first team in 2008.

All three will now advance to the national ballot for All-American voting.

Montevallo ends season with loss to Wingate in NCAA tournament

University of Montevallo senior Kara Zawisza receives an attack with teammate Rachel Wotitzky looking on during the Falcons' loss to... read more