Wilsonville native back home after mission trip to Japan 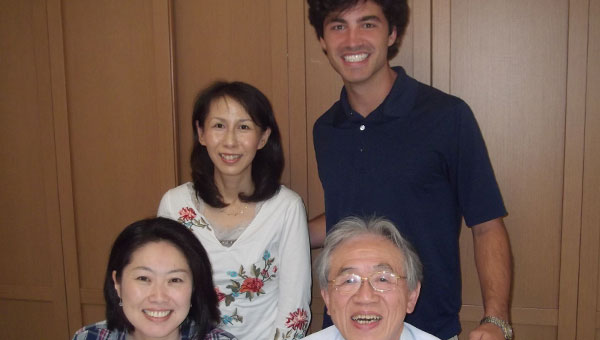 Richard Ketcham flashes his charming smile while posing with some of his English students in Japan.

As Richard Ketcham, originally from Wilsonville, flew back to the states after his three-month mission trip to Japan, one word — “overflowing” — described how he felt.

Richard graduated from Auburn last May with a biomedical sciences degree, and began saving for his mission trip. The trip was originally planned for 58 days, but when that time came, his budget allowed him to stay longer and when the missionaries asked if he would be willing to do that he gladly agreed. He stayed a total of 90 days, until his 90 day visa was completely out, and got back recently. Richard fit in well while there because only four years ago he went to Japan at age 18.

Richard said he learned so much and is still learning things from his trip now that he is back home and half a world away from Japan.

“It was such an amazing experience,” he said.

While in Japan. Richard was an intern for a Mission To The World church-planting team in Nagoya, Japan. He became a handyman, saying yes to almost any project he was put up to.

He described wanting to soak it all in and not miss a thing, so he did things like help landscape, pressure wash, paint, remodel and fix up houses. He also used his musical talent as he sang and played piano for the Kids Gospel, worship teams at church, and helped with several gospel choirs the team began.

One of his favorite ways he was able to reach out was through the English classes he got to help teach along with other missionaries. They taught in Nisshin, Japan, at Nisshin Christ Church. Nisshin is a small city located outside of Nagoya, which is where the church was located.

“I did a lot with the children’s ministry at the church and worked with young mothers, but also helped out with college kids since the church was so close to many colleges,” Richard described.

He became very close to many of the students he saw each day and developed many unforgettable friendships while there.

“I definitely will be staying close with the missionaries in Nagoya and supporting them through prayer and financial needs,” Richard said.

To see some of the beauty of Japan, you can see the pictures from the trip and read more about Richard’s mission work if you follow his trip by visiting his blog at Richardketchamnagoya.blogspot.com.

Buster the Bus winked his eyes, flashed his lights and spun his wheels, while students cheered him on. Students at... read more