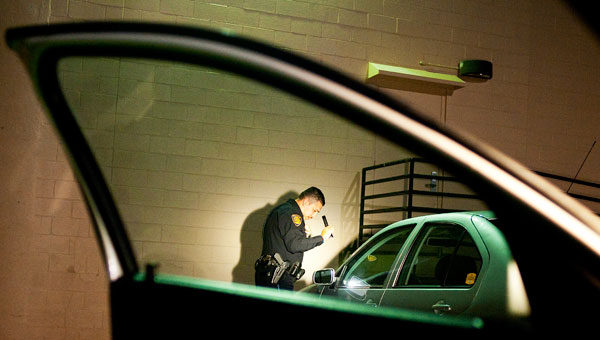 Pelham police officer Isaac Cruz investigates a car without tags that was parked behind a Pelham business during an overnight patrol on Nov. 4. (Reporter Photo/Jon Goering)

When Isaac Cruz was growing up in Mexico City, where he was born, he did not trust the police. Police officers in Mexico are often corrupt, he said. Many take money from drug cartels and are involved in kidnappings and organized crime.

At the age of 11, Cruz legally immigrated to the U.S. with his family. Today, as an adult with a family of his own, he can be found roaming the streets of Pelham every night serving as an officer for the Pelham Police Department.

“Never in my wildest dreams did I think I would be an officer,” he said. “Growing up in Mexico, you don’t think as cops being the good guys.”

In Shelby County, the Hispanic community and local law enforcement agencies still have a strained relationship. Whether from fear of corruption, deportation or simply ingrained cultural stigmas, many Latinos still don’t trust the police, Cruz said. On the other hand, law enforcement agencies must struggle to overcome language and cultural barriers in order to build their trust.

Shelby County Sheriff Chris Curry said in order for officers to serve and protect the community, they must have willing participants. The disconnect between the police and the Hispanic community is a detriment to both parties, he said.

While the sheriff’s office and many other agencies have made great steps to close that gap, there is still progress to be made from both sides.

“We’re trying the best we can to deliver these services,” Curry said. “In the big picture, we can’t just focus on the Hispanics. There are other nationalities that exist in Alabama, too. These issues could apply to any nationality in the world. The problem’s not going to lessen.”

Curry said his officers have encountered situations where they arrive at the scene of a car wreck or make a routine traffic stop and Latinos take off running.

He said it’s obvious they don’t trust the police when they refuse to speak with officers or take matters into their own hands instead of calling law enforcement.

Cruz said this distrust is deeply engrained in members of the Hispanic community. It begins in their home countries, where they don’t trust police because of corruption, he said.

“When we moved to Texas, we learned to adjust to the American culture,” he said of his family. “I wasn’t the type that I wasn’t going to trust the police here. I knew the officers here were not the same as they were in Latin America.”

He said other Latinos know this, too, but because they don’t understand the laws they are often afraid any involvement with police officers will result in deportation by the U.S. Immigration and Customs Enforcement.

“I haven’t had anyone tell me, ‘I don’t trust such and such because they’re a crook,'” he said. “It’s fear of ICE coming to arrest them.”

However, Curry said local law enforcement agencies don’t have the power to enforce immigration law. Living in the U.S. without a visa is a civil violation of a federal statue, he said. Therefore, only federal authorities can take action on it.

He said the only time local agencies are involved in immigration issues is if a felony is committed by an illegal immigrant. ICE officers routinely visit the Shelby County Jail to review the jail’s population and determine whether an illegal immigrant’s crime rises to the level of potential deportation. Curry said that level often starts with a felony.

Otherwise, local police provide services to everyone, regardless of their legal status, he said.

“Our purpose is to serve these folks, take care of them and hope to goodness we don’t encounter them in a felony case,” Curry said. “I think we’re establishing the fact that we’re not their enemy. We’re there to provide a service, they don’t have to run.”

Before moving to Pelham, Cruz worked as a patrol officer in Boaz, where he said the police were still largely viewed as the enemy by the Hispanic community. He said when he arrested Latinos, they would often treat him as a traitor or expect special treatment because of their shared race.

“In Boaz, I arrested a man and he told me, ‘You are a disgrace to the Latinos because you are putting me in jail,'” Cruz said. “I’m here to help. I’m just doing my job. I feel I’m here to break the barriers.”

One of the barriers Cruz helps law enforcement overcome every day is the language barrier. Curry said the county is attempting to hire more bilingual deputies, officers and corrections officers in order to better serve the growing Hispanic community.

“What we do in public safety, communication is vital,” he said. “When there’s a language barrier from someone out here in the community, it hits us at every level. First with the dispatch call, then speaking with officers on the scene, even at the jail when we’re trying to ask important questions about health issues in order for us to properly take care of this person. We had to supply Spanish-speaking people in all positions. Our success had been minimal.”

Along with Cruz, there are two other Spanish-speaking officers at the Pelham Police Department. Cruz said the department attempts to assign them different shifts, so someone is available to help translate at all times.

Other officers have attempted to learn the basics of the Spanish language to use on the job. Curry said the sheriff’s office often holds “survival Spanish” classes for its deputies, where an instructor comes in to teach a 16-week course for 50 deputies. He said it helps, but it doesn’t make them fluent.

The sheriff’s office, along with many other agencies, use Language Line services, an over-the-phone translator, to translate phone calls as they come in. Curry said the program can translate many languages, not just Spanish.

They also work closely with the Hispanic Interest Coalition of Alabama in Shelby County, he said. After the murder of several Hispanic men off U.S. 280 last year, the sheriff’s office desperately needed the help of the Hispanic community to figure out what happened, Curry said. HICA was able to step in to assist with contacts and translations, he said.

The silence between Latinos and law enforcement agencies, due to fear or language, can be dangerous, Curry said. This lack of communication can fuel crime within the community.

Every community relies on someone for protection, Curry said. If it’s not the police, it’s likely gangs. Sometimes when Latinos don’t report crimes to the police, they report it to family members or gang members who attempt to take justice into their own hands, he said.

Curry said it also sends a message to criminals that the Hispanic community is any easy target since they don’t report crimes to the police.

In the U.S. 280 murders, Curry said many Latinos didn’t want to talk to the police because they were afraid of the drug cartel, which has a strong presence in the Hispanic community.

“The Hispanic community is primarily responsible for the transportation of drugs into this area,” Curry said. “It’s a pipeline operated by almost Hispanics exclusively.”

Lt. Chris George, commander of the Shelby County Drug Task Force, said finding drug dealers within Hispanic communities is not always cut and dry. The problem is determining who is behind the operation and who is just transporting to pay off debts to the drug cartels.

“The challenge with the Hispanic community is their concern and fear about approaching law enforcement for help,” George said. “I’ve been told that’s part of their culture, taking things into their own hands.”

George said the problem is when Latinos turn to the drug cartel to enforce justice on someone who has committed a crime against them, they end up owing the drug cartel. Usually when this happens, they are required to commit someone in their family to run drugs, George said.

“We’ll have contact with someone they’re willing to sacrifice,” George said. “That person is nowhere near as involved in the drug trafficking ring but it’s still trafficking a controlled substance so they’ll get arrested.”

George said these criminals are often reluctant to tell police who is behind the drug ring. He said the drug task force has an agent who works with the Drug Enforcement Administration in order to find the larger connection between these smaller crimes across the region. Often drug arrests made in Shelby County have helped solve cases in other states, he said.

George said it’s important to remember that not everyone in the Hispanic community is involved in drug trafficking.

“There are many people here legally who are just trying to work and provide for their family,” he said.

Curry said the Hispanic community has shown more of a criminal element over the last ten years. But this is typical of any growing community regardless of race, he said.

Cruz said the drug cartels and the recent criminal element has given a negative stereotype to the community that shouldn’t be applied to all Latinos.

“I see it as we’re like apples,” he said. “There’s always a bad apple anywhere. It doesn’t matter where you come from, where you live. I’ve seen bad Hispanics. There’s gang members, some sell drugs, but there are also a lot of good working people just coming up here for a better life.”

In a world where police officers and Latinos don’t always mix, Cruz said he’s glad he can break the barrier between the two groups. He often encourages other Latinos to consider careers in law enforcement.

“In Boaz I used to go to schools and talk to the kids and tell them about my background,” he said. “The young generation, their parents came up here illegally, but they were born here so they’re citizens. I want them to know there’s a whole lot more than not going to school. They can have good behavior, get an education and go to college. I’m glad I could do that and be a good example for the younger generation.”