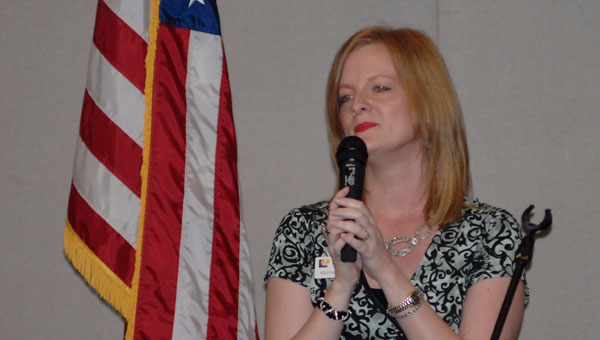 Shelby County residents have much to be thankful for, and should always strive to help those facing difficult times, speakers and business leaders said during the Greater Shelby County Chamber of Commerce’s pre-Thanksgiving prayer breakfast Nov. 23.

“It’s so good to be here, and to know that God has blessed us in a mighty way,” said Rick Swing, executive pastor of ministries at Alabaster’s Westwood Baptist Church. “We have a lot to be thankful for.”

During the breakfast, which was held at the Pelham Civic Complex, Michele Willis, vice president of marketing and development at Legacy Community Federal Credit Union sang “The Potter’s Hand” and “The Revelation Song,” and local pastors and business owners prayed and gave thanks for their blessings.

Much of the breakfast focused on the Birmingham-based Grace’s Kitchen nonprofit organization.

Through the organization, which was founded in 2009 by Lisa Latham and Paula Hughes, volunteers provide food to the homeless in downtown Birmingham.

“This is a great week to focus on what God has done,” Latham said. “We wish we could say that we saw a need and that this was our idea, but the idea came from God.”

The two founded the organization after returning from a mission trip to Louisville, Ky., during which God spoke to them, Latham said.

The group uses food donations as a way to minister to those in need, she said.

“We believe our organization uses food as a vehicle to share the saving grace of Jesus Christ,” Latham said. “We are committed to building relationships. We want them to know that we will be back.”

The group has faced some adversity while attempting to establish a “pay-as-you-can restaurant in downtown Birmingham, she said.

“We have both been hit pretty hard by the enemy,” Latham said of she and Hughes. “We found a building we thought was great for us to open up our restaurant, but we had a lot of opposition to it.

“But we hope that by showing (those in need) God’s love in a tangible way, we can help to share hope with them,” Latham added.

Pelham police officer Isaac Cruz investigates a car without tags that was parked behind a Pelham business during an overnight... read more