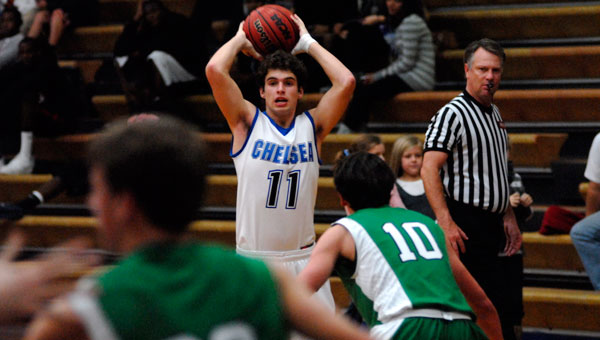 The Chelsea High School boys’ basketball team fell to John Carroll Catholic, 49-47, following a basket by the Cavs with 11 seconds remaining in its final game in the Hornets’ Thanksgiving tournament Nov. 24.

The Hornets had one last opportunity to tie the game, but junior guard Jake Ganus lofted a shot toward the rim with his back on the floor and senior guard D.J. Washington’s putback attempt at the buzzer rimmed out.

Ganus, who was named to the all-tournament team, led Chelsea (2-2) with 28 points.

D.D. Washington added 15 points. D.J. Washington chipped in four points to round out the scoring for Chelsea.

Luke Collins was named to the all-tournament team.

KaDeisha Stowes, who was named to the all-tournament team, led the Warriors (4-2) with 21 points in the victory.

Warriors down Vincent in title game