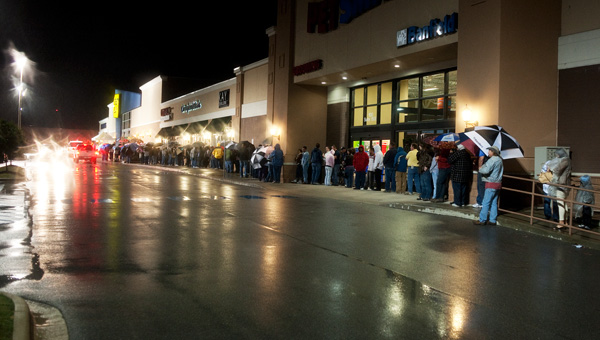 Shoppers stand in line to take advantage of the early morning deals at the Best Buy in Alabaster on Nov. 26. (Reporter Photo/Jon Goering)

Rain and cold weather did not keep local shoppers from hitting the stores before sunrise Nov. 26 as they hunted down the best Black Friday deals.

Store managers said business was booming this year as customers started their holiday shopping as early as midnight the day after Thanksgiving.

A line in front of Best Buy in Alabaster’s Colonial Promenade shopping center stretched down the sidewalk when the store opened at 5 a.m. Russ Stringer, of Helena, and his family were the first through door after staking their spot in line at 2 p.m. Nov. 25.

Stringer said they arrived right after lunch on Thanksgiving and were the third group in line. The two groups in front of them left after Best Buy handed out guaranteed vouchers for certain marked-down items. Stringer said he stayed because he had his eye on other items in the store that didn’t have vouchers. 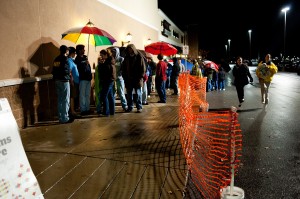 A pair of Best Buy employees skip past the crowd waiting in the rain on the morning of Nov. 26 to take advantage of early morning deals. (Reporter Photo/Jon Goering)

Throughout the night, Stringer camped on the sidewalk with his two teenage sons and their friends. They brought a generator, chairs, two Xbox 360s and a DVD player, he said.

“We call it urban camping,” he said. “It’s a family tradition.”

“It seems the crowds have been very responsive in coming out this year,” Hurst said. “People are still conscious of the economy but I think they’re putting that aside to get great gifts for their family.”

Hurst said eBooks were a popular item with shoppers this year and he expects large sales from Kindles, Nooks and iPads.

“I think when it comes to electronics, they just make great gifts,” he said. “Especially today when we’re driven so much by technology.”

Books-A-Million in the Colonial Promenade shopping center also drew large crowds this year with deals on books, DVDs and games.

The store’s co-manager David Glass said business lulled some during the Iron Bowl football game, but he still expects their sales to outnumber those from last year’s Black Friday.

The Thompson High School band took advantage of the early hours and cold weather to sell coffee, hot chocolate and donuts to shoppers in front of Best Buy and Belk. Kelley Drake, band booster and parent, said the group was raising money for the wind ensemble to attend the National Concert Band Festival.

Students in the band set up tents outside the stores as early at 1:30 a.m. to sell the warm treats to shoppers waiting in line.

“We figured these people who have been in line for a very long time might need some coffee and donuts,” Drake said. “It’s a service for them and it’s a fun way for us to raise money.”