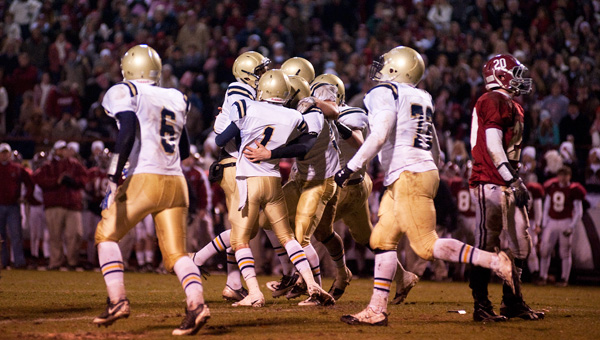 Briarwood Christian School players surround kicker Wilson Whorton after he made the game-winning field goal to lift the Lions to a 24-21 win over Hartselle in overtime in an Alabama High School Athletic Association Class 5A semifinal Nov. 26. (Reporter Photo/Jon Goering)

Whorton, suffering from a stress fracture in three vertebrae in his lower back, missed the potential game-winning kick as the ball failed to reach the goal post. 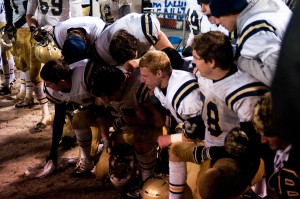 Briarwood players gather for a prayer as kicker Wilson Whorton comes on to attempt a 43-yard game-winning field goal at the end of regulation of Friday's game against Hartselle. (Reporter Photo/Jon Goering)

When the Lions held Hartselle without a score in the first overtime period, there wasn’t any doubt surrounding their offensive plans.

Briarwood ran the ball three consecutive downs and sent Whorton back out on the field for an 18-yard game-winning field goal to lift the Lions to a 24-21 win over the Tigers and a trip to the Class 5A championship game Dec. 2 at Jordan-Hare Stadium on the campus of Auburn University.

“I definitely needed to redeem myself,” Whorton said. “It was a great way to do that.” 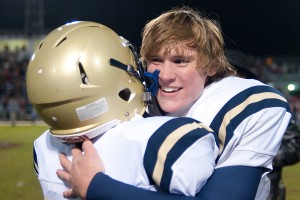 Briarwood kicker Wilson Whorton gets hugged by a teammate during the celebration following Whorton's game-winning field goal in overtime against Hartselle on Nov. 26. (Reporter Photo/Jon Goering)

Briarwood coach Fred Yancey knew Whorton would come through in the clutch for the Lions.

“Wilson is a great kicker,” Yancey said. “When the game was on the line and we needed the big points, he made a beauty.”

Whorton’s kick was set up by an interception by Matthew Furuto at the goal line on third down of the Tigers’ overtime possession. 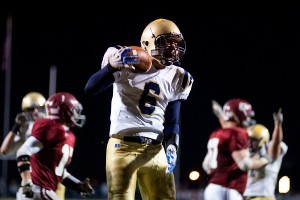 Briarwood's Matthew Furuto celebrates after making an interception in the end zone during overtime in Friday's game against Hartselle. (Reporter Photo/Jon Goering)

“All of our guys did their jobs and thankfully I got in there and got it,” Furuto said.

Whorton’s field goal highlighted a second-half comeback by the Lions, who trailed 7-0 at halftime and allowed a game-tying score in the fourth quarter before clinching the win in overtime. 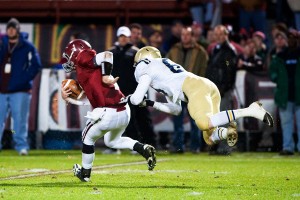 Sophomore receiver Daniel Robert was the star in regulation, as he caught seven passes for 129 yards and three touchdowns.

Junior quarterback Ben Craft completed 17-of-31 passes for 245 yards and three touchdowns. The Lions struggled on the ground with only 26 total yards on 22 carries. Craft led the Lions with 15 yards on 11 attempts. 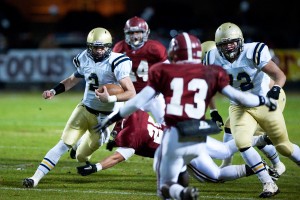 Hartselle opened the game with a 16-play, 80-yard scoring drive on its first possession, capped by a 14-yard touchdown pass from William Lang to Malcom Fossett. William Marsh added the extra point to give the Tigers an early 7-0 lead with 5:13 left in the opening quarter.

Briarwood cut the lead to 7-6 following a 25-yard touchdown pass from Craft to Robert with 9:39 remaining in the third quarter. Furuto’s rushing attempt for a 2-point conversion failed.

Hartselle extended its lead to 14-6 following a 1-yard touchdown run by Fossett and an extra point by Marsh with 4:31 left in the third quarter. 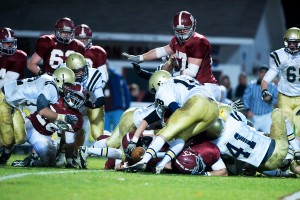 Hartselle running back Malcom Fossett tries to stretch the ball over the goal line on fourth down during Friday's semifinal game. Fossett fumbled the ball on the play, but the ball was picked up in the end zone by a Hartselle player for a touchdown. (Reporter Photo/Jon Goering)

Hartselle tied the game at 21-21 after Lang threw a 51-yard touchdown pass to Chris Slayton and Marsh added the extra point with 4:07 left in the game.

After a three-and-out by each team, the Lions got the ball back for a final drive in regulation. A 13-yard run by Sam Whitaker and an 11-yard pass from Craft to Cooper Harrington allowed Whorton a chance to win the game in regulation.

Whorton couldn’t finish off the Tigers on his first attempt, but he paved the way for Briarwood’s first trip to the Class 5A championship game since 2007 with his game-winning kick in overtime.

“It’s an incredible experience to get to Auburn,” Whorton said.

Yancey said he knew the Lions had a shot at a Class 5A championship after his team won the Region 5 title. Briarwood’s only loss during the regular season was to Class 6A powerhouse Vestavia Hills.

“I knew if we could win a region championship, we would be one of the contenders,” Yancey said.