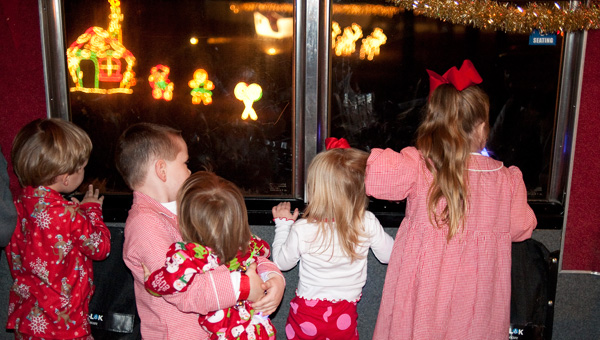 After arriving at the North Pole, children on the Polar Express watch for Santa on Nov. 28. (Reporter Photo/Jon Goering)

CALERA — Excitement filled the air in Calera this weekend as hundreds of pajama-clad children gathered around the train platform at the Heart of Dixie Railroad Museum to board the Polar Express.

Children of all ages waited anxiously with their parents as train attendants punched each ticket and helped passengers board the three train cars decked in festive garlands, strands of lights and bows.

Jim Ketchersid, of Hoover, acted as car host in one of the three cars. Dressed in a uniform complete with brass buttons and holiday tie, Ketchersid helped each family find seats before the train headed for its destination. 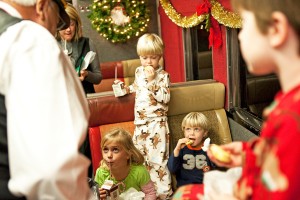 Elizabeth Ann Stewart, who spent the evening of her seventh birthday riding the polar express on Nov. 28, enjoys a chocolate milk with her brothers, Thomas, center, and Mac, right. (Reporter Photo/Jon Goering)

Ketchersid said he’s been volunteering with the railroad museum for 20 years and his favorite activity has always been the Polar Express.

“I’m a real fan from childhood,” he said. “I remember my mother reading the book to me, now I get to help these children. It’s a charming evening.”

A story reader read the story of the Polar Express aloud over the speakers of each car as the train chugged toward the North Pole. When the story was finished, he strummed a guitar and led the children in singing Christmas carols as they bounced in their seats and pressed their faces to the dark windows.

The North Pole soon appeared in the form of twinkling Christmas lights, dozens of holiday inflatables and a decorated Santa’s workshop.

“I see Santa!” many of the children shouted as Santa and Mrs. Claus emerged from the workshop and boarded the train. 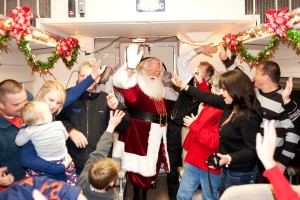 Riders on the Polar Express train wave goodbye to Santa as he leaves their car on Nov. 28. (Reporter Photo/Jon Goering)

The jolly pair made their way through each car, stopping to chat and take pictures with each child. Mrs. Claus signed copies of “The Polar Express” book that parents brought from home.

Elves and chefs followed, handing out a sleigh bell, chocolate milk and a cookie to each child and parent. After their snack, each child received a small stuffed animal and a commemorative tree ornament before the ride back to the station.

Freda Kyle, from Decatur, said she brings her grandchildren to Calera every year to ride the Polar Express.

“The Santa Claus is beautiful,” she said. “I love bringing the grandkids. It’s special to them because it’s Christmas and it’s the Polar Express.”

Kyle said this year the cookies were her grandchildren’s favorite part. 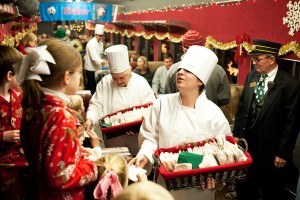 Polar Express chef Carrie Glass looks out from underneath her hat while handing out cookies to children on the train ride Nov. 28. (Reporter Photo/Jon Goering)

The Polar Express will share the holiday experience with 13,000 passengers this December and has already sold out of tickets for all its trips this year.

The railroad museum still has tickets available for Santa Special, a train ride with Santa Claus.  For more information visit Hodrrm.org or call 280-0820. 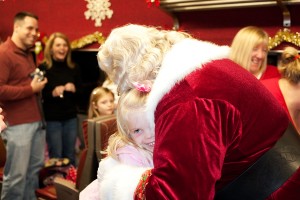 Molly Seales gets a hug from Santa as he passes through the Polar Express on Nov. 28. (Reporter Photo/Jon Goering)