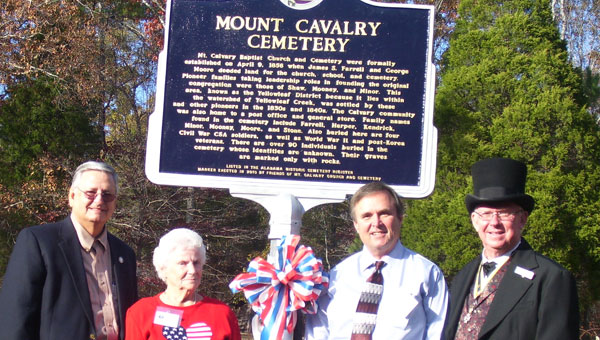 After several years of silence, the hallowed sanctuary of an old Chelsea church again rang with music and voices on a recent, beautiful fall morning.

In the afternoon, descendants of church founders gathered in front of the church for the dedication of a historical marker at the cemetery across Shelby County 74.

Norma Jean Harper Howell, Friends of Mt. Calvary Church and Cemetery president, has worked for several years to make this day a reality, as did her deceased parents, Malvin and Johnnie Mooney Harper.

Their ancestors were among founders of Mt. Calvary Missionary Baptist Church (established more than 150 years ago) and are buried in the cemetery, which has been listed on the State of Alabama Historic Cemetery Registry.

People from as far away as Oklahoma attended the celebration, sharing genealogical records, pictures and interesting stories.

When Allan Staib moved from Texas to Shelby County, he had no idea that he has family roots in Alabama, he said. In 2006 the discovery of a note written by his deceased grandmother led him to research, where he learned he lives only 20 minutes from the old homestead and burial site of his great, great grandparents Calvin Lee and Elizabeth Seale Mooney. Both were founding members of Mt. Calvary church.

Mooney was wounded three times during the Civil War. He lost his left arm while holding aloft the battle flag, which dropped from his dead comrades hand.

Austin Scott of the Sons of the Confederacy spoke.

Some of the ladies who meet for the city of Chelsea’s early morning exercise class for senior adult women are... read more