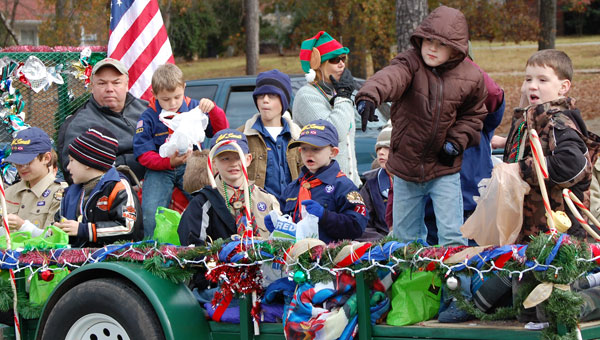 A group of Cub Scouts throw candy to spectators on U.S. 31 during the 2008 Alabaster Christmas parade. This year's parade will feature more than 100 floats, trailers and vehicles. (File photo)

More than 100 floats, vehicles and trailers will shower thousands of spectators with candy along U.S. 31 in Alabaster Dec. 4 during one of the state’s largest Christmas parades.

The parade, which will feature former Kingwood Church pastor Ron Cox and his wife, Suzanne, as grand marshals, will kick off at 10 a.m. near the intersection of U.S. 31 and Industrial Road.

“Pastor Cox and his wife are still involved in worldwide-type missions, and they have been involved in the community for years,” said Alabaster Mayor David Frings.

Participants usually begin assembling in about 12 parking lots from the Keystone Plaza shopping center near Shelby County 68 to the LifeSouth Community Blood Center near Industrial Road at about 8:30 a.m.

“It takes a big community effort to put this together every year,” Nance said Nov. 29. “The Beautification Board mails out all the lot assignments, which makes it easier to organize everything on the day of the parade. We have 101 participants right now, and I expect a few more to sign up before the parade.

“We have about 12 different lots from Keystone Plaza all the way down to LifeSouth, and there are usually about 10 to 12 different floats in each lot,” Nance added.

Because some floats stage at LifeSouth, Nance and Frings urged parade spectators looking for the best spot to line up along U.S. 31 between Shelby Baptist Medical Center and Alabaster City Hall.

“I’m not sure exactly how many people come out to see the parade each year, but it is packed. It will be wall-to-wall people on 31,” Nance said.

“A lot of floats run out of candy by the time they get to the old Bruno’s, so if you can get anywhere on 31 or around City Hall, that will probably be the best place to watch,” Frings said. “But know that you are going to be there for the duration of the parade if you watch it there.”

With thousands of spectators lining one of the busiest roads in Shelby County, nearly every Alabaster Police officer will be on duty to ensure everyone’s safety, said Lt. Jeff Anthony.

From 10 a.m. until about 12:30 p.m., police will close the southbound lane of U.S. 31 between Shelby County 68 and Alabama 119. The northbound lanes of U.S. 31 will remain open, and will carry both north- and southbound traffic.

Alabama 119 will remain open, but police will close the intersection of U.S. 31 and Industrial Road, Anthony said.

“Our entire department works out there that day. It is definitely one of the biggest events around,” Anthony said. “We just want to make sure everyone is safe. On a whole, we haven’t had any injuries or accidents.”

During the parade, Cub Scout Pack 220, which is sponsored by Westwood Baptist Church, will collect non-perishable food items to distribute to Alabaster food pantries. The scouts will walk along the parade route and collect the food items from the spectators.

Giving back is an important part of the Christmas season, Frings said.

“We all associate Alabaster with a very affluent society, but we do have some in need in our midst,” Frings said. “There are a lot of things that we take for granted that some people in our city do not have.”

Searching for a country music legend

The Montevallo Main Street Players are looking for local musicians for the theater group's next production. (Contributed photo) FROM STAFF... read more