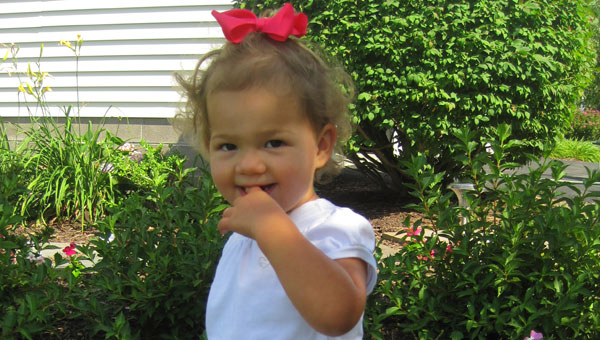 A few months ago, Birmingham residents Boyce and Amy Steel were amazed when they heard a two-word phrase from their daughter, Danica.

When the couple offered Danica a bite of pumpkin bread, the 2-year-old nodded and responded with a confident “Uh-huh.”

It was the response the Steels had been waiting on for years.

“It was a big day in our house when our daughter, Danica, enthusiastically nodded her head and said ‘Uh huh’ when asked if she wanted another bite of pumpkin bread,” the Steels wrote in a memoir to the Arc of Shelby County. “Though she is approaching 30 months of age, we are only now beginning to see Danica physically and verbally express herself with clear intent.”

When the Steels brought their daughter to her pediatrician for her one-year checkup, the doctor noticed several developmental delays. A later evaluation performed by the Arc determined Danica was more than 25-percent delayed for her age.

After the evaluation, the Arc of Shelby County, a Pelham-based non-profit advocacy organization for children and adults with developmental disabilities and their families, recommended Danica participate in special instruction and physical therapy.

Through its early intervention program, the Arc provides services to children younger than 3 facing developmental disabilities to ensure they are supported during one of the most important times of their lives, said Arc Executive Director Karen Stokes.

“So much of a child’s development happens before they turn 3,” Stokes said. “The earlier we start with the family, the better case we will have.”

The Arc works to pair families of developmentally disabled children with service coordinators and specialists who “coach” families on how to interact with their children.

“We are only with the families as visitors,” Stokes said. “The best work we can do is to go in and coach families on how to establish good teaching habits with their children.”

Thorough the special instruction and physical therapy sessions at the Steels’ home and at Danica’s daycare, the family improved Danica’s motor skills and communication.

“With the help of all the therapists, we have taught Danica several signs so she can communicate with us,” the couple wrote.

By incorporating the Arc lessons and exercises into activities Danica enjoyed, such as playing and eating, the family has been able to teach Danica to improve her motor skills and communicate physically and verbally, the Steels said.

“Michelle, the speech therapist, identified new ways to speak with Danica to impress upon her the importance of communication,” the family wrote.

“During the last year and a half, the progress Danica has experienced is so encouraging,” they added. “We are learning how she learns, and feel her future is brighter as a result of the therapy.”