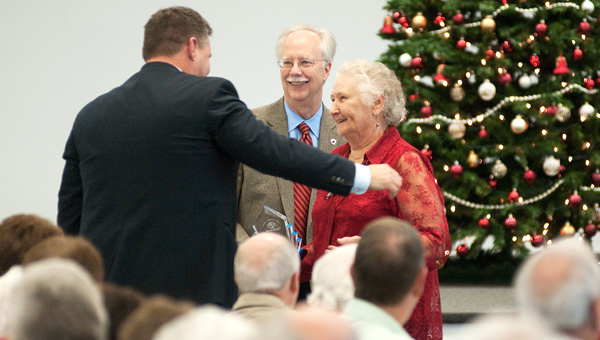 Judge Jim Fuhrmeister, center, RSVP advisory board chair, looks on as County Manager Alex Dudchock congratulates Mary Ross, who was the only one who logged more than 20,000 volunteer hours. Ross, who has been volunteering since 1993, was just one of a number of those who were recognized on Dec. 1 for their donating their time to volunteer. (Reporter Photo/Jon Goering)

CALERA — Volunteers from throughout Shelby County celebrated more than 150,000 service hours completed so far this year during a volunteer recognition and luncheon Dec 1.

The Retired Senior Volunteer Program of Shelby County hosted the luncheon at the Rolling Hills Conference Center in Calera to honor its participating volunteers.

RSVP coordinator Marvin Copes said 600 volunteers were recognized this year with a trophy or pin. Awards were based on years of service, hours served and group achievement, he said.

Mary Ross from Pea Ridge was recognized for having the most total volunteer hours at 23,000. Ross said she’s been volunteering since 1993 by driving people to medical appointments, visiting nursing homes and volunteering at the jail among other service projects.

“I made myself a resolution that I wanted to do something and give someone something every day of my life,” she said.

Eleven groups throughout the county received awards for serving 5,000 or 10,000 volunteers hours in a year.

Volunteer hours to date have already surpassed the amount served last year, Copes said. At the government-assigned value of $20.35 an hour, RSVP volunteers have saved the county more than $3 million this year, he said.

Penny Kakoliris, executive director of Positive Maturity, RSVP’s sponsoring agency, said the county’s commitment to volunteerism has been especially important during the downturn in the economy.

County Manager Alex Dudchock spoke at the luncheon about the value of older volunteers. He noted that many of the volunteers recognized were serving people close to their same age.

Copes said volunteerism is a way for seniors to stay active while also improving the lives of others.

“One things I can’t stand is having a senior sit around just for the sake of sitting around,” Copes said. “Service is the name of it. Service and partnership.”