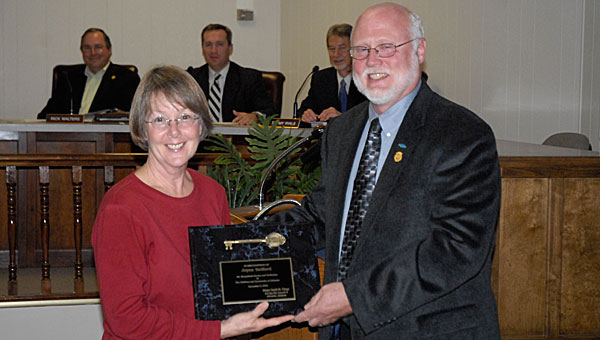 A longtime Alabaster resident received a rare “Key to the City” award for her volunteer work throughout the years during a Dec. 2 Alabaster City Council meeting.

During the meeting, the council presented the award to Joyce Bulford, who recently worked with the Blue Star Mothers organization to collect tube socks to send to soldiers fighting in the Middle East.

“We have been watching what you have been doing for other people, and we wanted to recognize you,” Frings said to Bulford. “You give from your heart. I see no more fitting person to receive this than you.”

Bulford recently helped collect and ship more than 3,000 pairs of socks to troops in Afghanistan and Iraq, after she learned they were the top request from the soldiers.

Before honoring Bulford, the City Council donated 750 more pairs of socks to the drive. Bulford also received a monetary donation to help with shipping the socks.

“You think about them walking or driving down the road and maybe hitting a mine or something. And their number-one request is for tube socks?” Bulford said. “I can get white socks.

“I appreciate this award so much,” she said. “Thank you so much.”

In addition to the sock drive, Bulford, who has lived in the city since 1985, has also served the city’s schools as a bus driver and a substitute teacher. Each Christmas, Bulford and other school bus drivers sponsor children in need at Thompson Middle School.

She helped secure the funds to build an adaptive playground at TMS, and helps to maintain the school grounds, Frings said.

“Thank you, Joyce for the wonderful example you set for our city,” said Ward 1 Councilwoman Sophie Martin.

In other business, the council also declared 1979 Pierce Arrow fire truck as surplus, and donated it to the Shelby County School of Technology.

The truck had been used by the city for many years, and had become outdated. The school will use the truck as an instructional aid for its firefighting program.