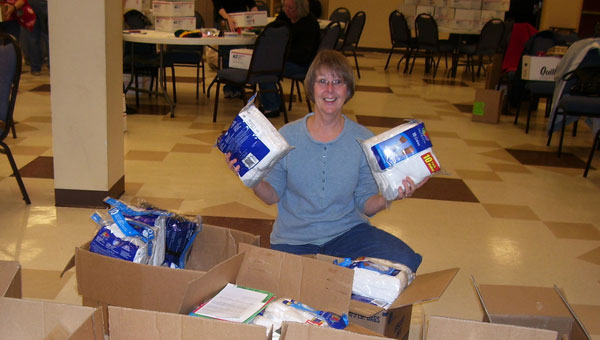 Joyce Bulford of Blue Star Mothers of Alabama packs socks to be sent to deployed soldiers, while other members of the group pack and address boxes of homemade goodies and personal items.

Pamela Wilson, president of Blue Star Mothers of Alabama Chapter One, said that after her son Larry Wilson Jr. left for Afghanistan and she began helping send care packages, she would hear from chaplains, commanding officers and service members, “please always send at least one package of socks in every care package.”

“Several of our service men were killed the week before Pam told us of the guys’ request for socks,” said Joyce Bulford. “The request was such a simple one compared to the job they were doing. There was no way I could let this request go unanswered.”

So, on a recent Saturday, a group of Blue Star Mothers, along with a couple of men, met at North Shelby Baptist Church, where they packed 3,091 socks for mailing. Socks for the men were sent to three chaplains, while socks for women went to Operation Care Package.

About2,000 more will go out after the first of the year, after the group gets more addresses of battalions that are deployed, Wilson said.

Homemade goodies and personal items were also packed and mailed. These were donated by individuals and organization members’ co-workers at EBSCO, St. Vincent’s Hospital, Shelby County Schools and other places of employment.

Blue Star Mothers Chapter One received its charter in October 2008 and covers the central Alabama area. Recent activities included participation in the Veterans Day parade in Birmingham and the Laying on of Wreaths at the National Cemetery in Montevallo on Dec. 11.