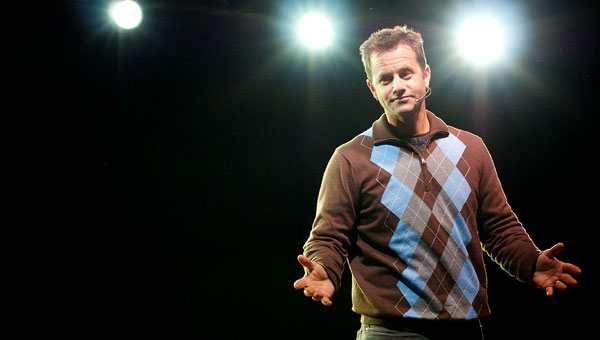 CHELSEA — Despite the frigid weather, hundreds gathered in front of an outdoor stage in Chelsea Dec. 5 to hear the Christmas story from television and film actor Kirk Cameron.

Cameron took the stage at the King’s Home Chelsea campus a little after 6 p.m. as the keynote speaker in the day’s lineup of Christian worship bands and speakers.

All performances were a part of Kampfire for the King, the first annual Christmas event for King’s Home.

Cameron said he wanted to come to Chelsea for the event to help support the work of King’s Home and tell the people of Chelsea the story of how he became a Christian.

“Hannah Homes and King’s Ranch are doing so many great things to help abused women and children,” Cameron said. “And with this being Christmas, my favorite time of year, I wanted to come out and talk about the reason for the holiday. I’m hoping to offer inspiration and comfort for the people that are here.”

Cameron started his speech by acting out a short montage of scenes from “Growing Pains”, the 1980s sitcom that made him famous playing Mike Seaver. Cameron called the montage the “60-second Seaver fever reliever.”

After a few jokes, Cameron moved to more serious subjects, starting with his conversion to Christianity.

“I grew up an atheist,” Cameron said. “I didn’t go to church. Jesus was part of a different trinity to me. It was the Easter bunny, Santa and God.

“The two top life changing events of my life occurred while I was on ‘Growing Pains,’ he added. “I met my wife, who played Mike Seaver’s girlfriend. We’ve been married 20 years now and have six kids. The second life-changing thing was when I met the Lord Jesus Christ.”

Vicky McKay of Chelsea attended the Kampfire for the King with her husband and two children. She said she enjoyed Cameron’s address and thought it was a good for her children to hear.

“I love Kirk Cameron, I always have,” she said. “I admire his faith and I think he’s a wonderful example and role model.” 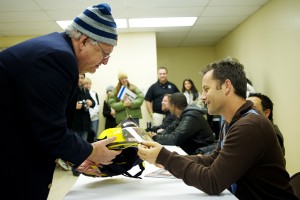 Before Cameron took the stage, Chelsea mayor Earl Niven presented him with a Chelsea pin, a Chelsea cookbook and a Chelsea Fire Department helmet for his role in the movie “Fireproof.” Niven said he made Cameron an honorary fireman of Chelsea.

“It’s outstanding to not only have him but the whole group of performers,” Niven said. “It’s a blessing that we have this group that provides their time and effort to such a good organization as the King’s Home.”