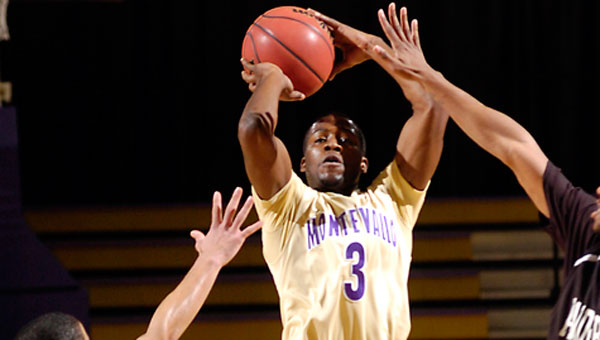 University of Montevallo junior Antoine Davis led the Falcons with 14 points in a 71-58 win over Lander University in a Peach Belt Conference contest Nov. 30. (Contributed)

The University of Montevallo men’s basketball team moved up from 13th to 10th in the most recent National Association of Basketball Coaches’ NCAA Division II poll.

The ranking marks the third-straight week the Falcons have secured a spot in the top 25. It is the first top 10 ranking this season. This is the Falcons’ highest ranking since Dec. 19, 2006, when they were ranked 10th as well

The Falcons were led by junior Antoine Davis, who scored 14 points off of 5-of-6 shooting.

The Falcons’ big men stepped up again as seniors Cecil Coleman and Ronald Severtsgaard scored 11 and 10 points, respectively. Coleman added seven rebounds, while Severtsgaard had six boards and hit 5-of-6 shots from the field.

The Falcons hit 49 percent of their shots while holding Lander to just 38.2 percent.

Montevallo held onto the lead the rest of the first half as they ended the period up 33-25.

Early in the second half the Bearcats cut the lead to just three points, but Montevallo responded with a 15-6 run to push its lead to 12 points. The run was capped off by a 3-pointer from Beatty.

With just over five minutes to play, the Bearcats cut the lead to just six points. A few seconds later both teams had to clear the floor due to a tornado warning in Shelby County. After a brief intermission the Falcons ended the game with a 14-7 run, including 10 points from Davis.

Montevallo was led by juniors Miles Beatty and DeMarcus Catchings, who scored 20 and 17 points, respectively.

Beatty hit 5-of-8 field goals from downtown while hitting 3-of-4 free throws. Catchings hit 8-of-11 shots from the floor while grabbing five rebounds.

Coleman scored 12 points while grabbing eight rebounds and dishing out four assists. He hit 5-of-6 shots from the field and was a perfect 2-of-2 from the free-throw line.

The Falcons shot a season-high 58.6 percent from the field while holding Concordia to just 37.8 percent. Montevallo also outrebounded Concordia 45-30.

With 5:53 left in the first half and Montevallo up 29-26, the Falcons went on an 8-0 run, capped off by a pair of free throws from junior Jervan Jackson. The Hornets were able to cut a few points off the Falcons’ lead in the final minutes as the teams went into halftime with Montevallo up 37-29.

The Hornets were able to cut the lead to just six points early in the second half. Montevallo responded with an 11-0 run to open up a 17-point lead. The Falcons’ lead remained in the double-digits the rest of the half.

The University of Montevallo made a change in the leadership of its women’s basketball program Dec. 1 by terminating Mechan Vanderpool’s position as head coach.

Current assistant coach Brittany Godsey will serve as the Falcons’ interim head coach through the end of the 2010-2011 basketball season.

The Falcons (3-4 overall, 0-1 in Peach Belt Conference) scored the third-highest point total for a Montevallo team since joining the National Collegiate Athletic Association.

Montevallo also tied the record for most assists in a game and broke the single game record for steals. The Falcons had 24 assists and finished with a school-record 31 steals in the victory.

Senior Carrie Parrott and junior Shavonne Seymore led the way with 14 points and six rebounds each.

Junior Davia Harris added 12 points and six steals while hitting 5-of-7 field goals from the floor. Senior Jessica Collins and redshirt freshman Alex Strickland each finished with 10 points. Collins was 5-of-8 from the field. Strickland was 3-of-6 from the field and a perfect 4-of-4 from the charity stripe.

Montevallo forced 42 turnovers and scored 53 points off those turnovers. The Falcons also outrebounded the Eagles 54-31 while having a 20-9 advantage on the offensive glass.

The 97 points is the most points scored by a Montevallo team since 2002 when the Falcons scored 103 against Miles College.

The Falcons opened the game with a 33-1 run and never looked back as they outscored the Eagles 49-13 in the first half and 48-14 in the second half.

Montevallo held the Eagles to just 18.4 percent from the field. Only one Judson player finished with double-digit points as Joycelyn Seidule scored 10 points and grabbed eight rebounds.

The Falcons dropped their first Peach Belt Conference game of the season following a 97-68 loss to Lander University.

Montevallo outscored the second-ranked Bearcats in the second half, 46-44, but it was not enough to erase a large first-half deficit.

Montevallo was led by Seymore, who scored 17 points while hitting 7-of-12 from the field.

McClure added 13 points, five rebounds and four assists while hitting 5-of-8 from the field. Parrott scored 12 points while grabbing a team-high seven boards.

Moore-Smith was the only other Montevallo player in double-digits with 10 points. Collins had eight points, five assists and five rebounds.

The Falcons shot 39.1 percent in the first half, but responded in the second half as they shot 50 percent from the field. Montevallo continued its strong shooting from the free-throw line as the Falcons hit 12-of-14, good for 85.7 percent.

The second half was pretty even for both teams as the Bearcats hung onto their 30-point lead most of the period. Lander took its largest lead at the 8:39 mark of the second half as they led by 40 points. Montevallo was able to cut that lead to just 29 points as the time expired.

University of Montevallo senior Nathaniel Foster of the men’s soccer team was recently named to the Daktronics All-America second team.

Foster led the Falcons this season with 18 goals and 40 points. Foster was named first team All-Peach Belt Conference and was the most valuable player at the PBC tournament.

The team is voted on by the NCAA Division II members of the College Sports Information Directors of America (D2SIDA), with the online nomination and voting process powered by ATHLETICSITE.COM.