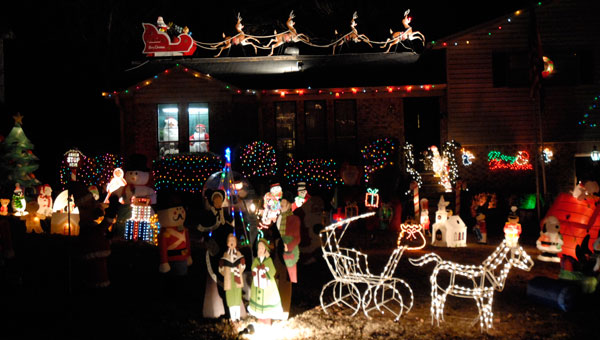 Pelham resident Jim Phillips decorates his home on David Drive with thousands of lights and dozens of Christmas decorations every year. On Dec. 18, Santa Claus will make an appearance in the sleigh on the roof. (Reporter Photo/Neal Wagner)

A closer inspection reveals a plethora of plastic animated Christmas characters, a genuine Coca-Cola Santa Claus figure in the window, a storefront-like miniature village display in the garage and a one-of-a-kind sleigh and reindeer on the roof.

Nearly 44 years ago, Phillips, 59, caught the Christmas bug when he started portraying Santa Claus at the age of 15.

“Every year, I just add to what I have,” Phillips said. “I used to store it all in my house, but I ran out of room and had to get one of those portable barns in my backyard.

“That barn is pretty full of Christmas stuff,” Phillips said with a laugh.

From plastic figures to blow-up snow globes and nativity scenes, Phillips’ yard has nearly every holiday-themed item imaginable. It takes him six days to unpack and place all of the decorations and lights in his yard, he said.

“The Santa Claus I have in the window is one of the 200 original Coca-Cola Santas,” Phillips said. “And the sleigh and reindeer are one-of-a-kind. I got them from a man in Hoover who made the mold himself.

“A man in New York had arranged to buy the mold, but the building they were in burned before he could pick them up,” Phillips said, noting the sleigh and reindeer were displayed in the City Federal building in downtown Birmingham for several years in the 1970s.

Although Phillips keeps his displays lit during the weeks leading up to Christmas, his main event will come on Dec. 18, during which Santa will take his seat in the sleigh atop Phillips’ house from 6-8:30 p.m.

Santa’s visit will be complete with live reindeer and a snow machine, Phillips said.

“Last year, I gave out 599 suckers to children, and by the time you add the people who drive by in their cars, we probably had 1,800 to 2,000 people come by (during Santa’s visit) last year,” he said, noting the Pelham Police Department directs traffic into his neighborhood every year. “It’s unbelievable how many people show up. Last year, we had people from Mobile, Huntsville and even parts of Tennessee.”

During this year’s Santa visit, Gardendale-based Happy Feet Missions will be set up in Phillips’ neighbor’s driveway selling slow-cooked hams for $30 each to benefit the charity, which ships shoes to underdeveloped countries across the world.

In addition to the lights and decorations in his yard, Phillips also decorates his garage with miniature Christmas Village items to resemble an old-fashioned storefront.

“You used to go to Pizitz or Loveman’s in downtown Birmingham and see all the windows set up for Christmas,” Phillips said. “I wanted to create something like that in my garage.”

Because Phillips powers thousands of lights and dozens of Christmas displays, he recently installed an underground electrical grid in his front yard. The grid is safer than running a network of extension cords through the yard, he said.

“Last year, my breaker box actually caught on fire, but I was lucky enough to have an electrician friend who helped me with that,” Phillips said with a laugh.