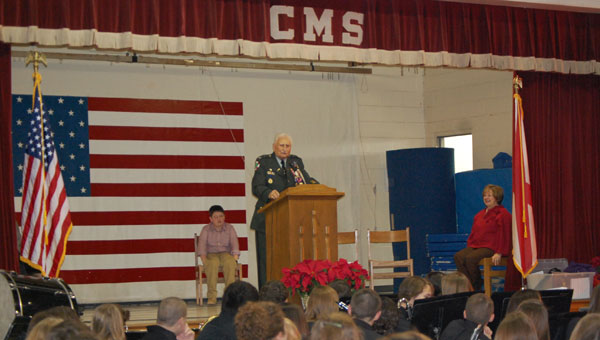 Retired Col. Glenn Frazier, of Daphne, is the best-selling author of “Hell’s Guest”, a memoir that chronicles his experiences as a prisoner of war. Frazier spoke at the middle school on the request of sixth grader Josh Holland, who e-mailed Frazier directly inviting him to come to the school.

“I knew it was a long shot,” Holland said. “But I wanted him to come because a lot of people these days might have thought this war stuff is stupid. I wanted them to see someone who had been through it.”

At the school assembly, Frazier and his wife awarded Holland with a plaque for being their “Patriot of the Year.” 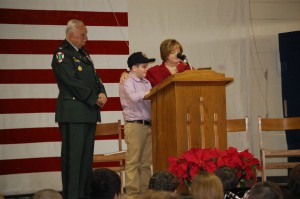 Sixth grader Josh Holland recieves a plaque from Col. Glenn Frazier and his wife for initiating the assembly at Columbiana Middle School Dec.7.

He told the story of his time in the war, beginning when he was 16 years old at the time of the Pearl Harbor bombing. Frazier said he lied about his age so he could serve in the Army and was stationed in the Philippines.

“It was a terrible situation but we knew it was war and we knew what we had to do,” he said.

In 1942, the troops in the Philippines were forced to surrender after not receiving reinforcements, he said. Frazier was taken prisoner by the Japanese along with 75,000 other American and Filipino soldiers.  Their forcible transfer became known as the Bataan Death March due to the treatment they received.

“They were the most inhuman people we’d seen or heard of,” Frazier said of his captors. “We couldn’t figure out why they were so mean to us. We figured out all they wanted was to have us as slave labor. We didn’t mean anything to them. They thought we were yellow dogs because we surrendered.”

Frazier told the students of the beatings he endured, the diseases he overcame and the experience of being forced to dig his own grave before eventually being rescued.

“I came home with great pride and I had a wonderful welcome, but I started having nightmares caused by the hatred I had for the Japanese,” he said. “I couldn’t get rid of them. I didn’t want to get rid of them.”

Frazier told the students how it took him three and a half years to fully recover after returning home.

“I stand before you as an old veteran who has a lot of experience in bad things,” he said. “Sixty-nine years later, I’m still talking about it. But I don’t hate anybody. I don’t care who they are, there’s a way to solve your problem without hatred.

“Try to do what’s right, to forgive people and live as good citizens,” he added. “Be good students and good people.”

“How many students are able to hear it word of mouth from someone who lived through it? Not many get that experience,” she said. “Now they can know and understand what he went through without having to read it in a textbook.”