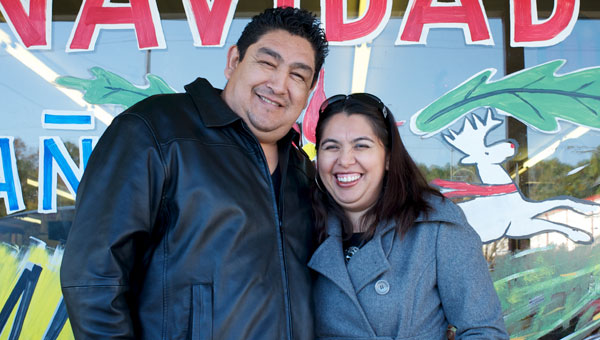 Joel and Isabel Rivera own several businesses in Shelby County, including the 1500 AM radio station in Alabaster and the Mi Pueblo supermarket in Pelham. (Reporter Photo/Jon Goering)

At about 10:50 a.m. on a chilly December day in Pelham, cooks at the Mi Pueblo supermarket rushed to stuff tamales, flatten tortillas and prepare guacamole in time for the coming crowds.

Though the store’s aisles were relatively empty at the time, the Mi Pueblo employees knew what was coming in about half an hour.

As noon approached, the tables in the back of the building began to fill, as members of Shelby County’s Latino community enjoyed a taste of home.

“At lunch and dinner time, all of these tables will be full,” Calera resident Joel Rivera, who owns the restaurant along with his wife, Isabel, said with a smile. “In the kitchen, we do real, real Mexican food.

“This is not Tex-Mex or anything like that,” Joel added. “We have the best tamales in town, we have the best fajitas and we make hot bread every morning of every day.”

When the Riveras moved from Mexico to Texas in 1985, they had no experience owning multiple businesses, stocking store shelves with everything from laundry detergent to religious candles and distributing radio messages to thousands of listeners.

Growing up in San Luis Potosí, Mexico, the Riveras experienced a much different culture than the one in Shelby County. The economy throughout much of Mexico is in poor shape, which makes it hard to operate a profitable business, Joel said.

“It is 100 percent different,” he said with a laugh. “Here in Shelby County, everyone has something to do all the time.

“In Mexico, I had a lot of time to kill. It was a much slower life,” Joel added, noting the family still owns a laundry business in San Luis Potosí. “Here, everyone has more money. In Mexico, it’s hard to have a business.”

Walking through the Pelham Mi Pueblo supermarket, which is off U.S. 31 across the street from the Old Time Pottery store, reveals an array of brightly colored piñatas dangling from the ceiling, rows of fresh peppers and a refrigerated section filled with Mexican versions of popular drinks like Coca-Cola and Pepsi.

“The whole store is filled with items you can’t find anywhere else around here,” said Theresa De Leon, a public relations specialist for Rivera Communications, one of the couple’s other local ventures.

“They don’t have vanilla extract like this anywhere else around here,” De Leon said as she browsed the aisles. “Most of the produce is straight from Mexico. We have people of all nationalities and cultures who shop and eat here regularly.”

The Mi Pueblo shopping experience is set to an instrument-heavy soundtrack provided by Alabaster’s 1500 AM radio station, which the Riveras also own.

In late November, the family held a ribbon cutting ceremony for the new Rivera Communications, which is based off Yeager Parkway in Pelham. From the radio station, the family broadcasts simultaneously on the local 1500 AM, 1450 AM in Bessemer and 620 AM in Lexington. All three radio stations are named La Jefa, meaning “leader,” and cover much of the state.

“It was a good business opportunity,” Joel said of the radio stations. “I didn’t know a lot about communications when I started them.

“I actually didn’t know anything about owning a restaurant or grocery store when I opened this store (in 2006),” he added with a laugh. “But business is going pretty good right now.”

When the Riveras moved to the United States in the mid 1980s, Joel was heavily involved in the construction industry, which continues to be one of his main business ventures today.

“I have 25 years already in the construction business,” Joel said. “My main work is still with my construction company. Construction is why I moved to Birmingham, which was 14 years ago.”

The Riveras’ Shelby Construction company has built across the state, and in northern Florida.

Because response to the Riveras’ businesses has been strong, the family is looking to open a fourth Mi Pueblo supermarket on U.S. 280 in 2011, Joel said.

“Oh yeah, I love Calera. My children are very active in school,” Joel said. “My father still lives in Mexico, and he comes to visit us for about one or two months at a time.

“Will we be in Shelby County for the rest of our lives?” he added. “I’m not sure. I want to say yes, but we still have a lot of family in Mexico, and I would like to come back home someday.”