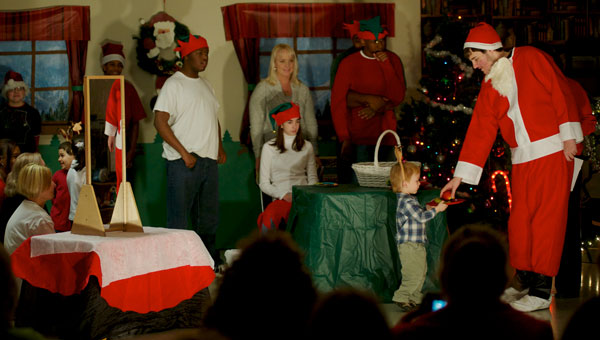 Students at Linda Nolen Learning Center in Pelham perform a play at the Center on Dec. 9. (Reporter Photo/Jon Goering)

Every student at the Linda Nolen Learning Center helped to mix Broadway with the North Pole Dec. 9 as they took the stage to deliver opening day of the school’s annual Christmas-themed play.

The students acted out “A New and Improved Santa,” which was inspired by the book “A New Improved Santa” by Patricia Rae Wolff while students from Creek View Elementary provided holiday-themed music to fill the interlude gaps.

“These students are definitely well-prepared to perform for you today,” said LNLC Principal Michele Shepherd.

The six-act play, which was set inside Santa’s workshop, chronicled Chris Cringle’s yearlong journey to update his image, and gave a month-by-month recap of his efforts.

The first act detailed Santa’s New Year’s resolution to exercise more and eat healthy, and was acted out by students from Joyce Campbell’s, Crystal Dreyer’s and Noelle Kovall’s classes.

In the second act, which was acted out by students from Todd Crenshaw’s, Kim Lolley’s and Laura Wren’s classes, Santa attempted to gain a tougher appearance by dying his hair brown and spiking it and dressing like a leather-clad biker and a shirt-and-tie-wearing skateboarder.

The play’s midway point, which was acted by students from Laura Calhoun’s, Kay Masters’ and Sybil John’s classes, featured a Hawaiian shirt-clad Santa relaxing on the beach with his elves.

Santa also attempted to store all of his letters on his laptop computer, and was saved by Mrs. Claus, who kept paper records of the letters, when his computer crashed and lost the letters.

After Santa’s snowmobile and pickup truck were unable to traverse the North Pole’s snowy landscape, he toured the world in his new rocket-powered helicopter. But when children across the world saw him, they demanded Santa return to his traditional appearance and method of transportation.

The final act, titled “The Same Old Santa,” was acted out by students from Kelly Goodwin’s, Brooke McGill’s and Byrne Sanders’ classes, and documented Santa’s return to his red-and-white suit and reindeer-powered sleigh.

“The students have been preparing for this all week. A lot of the older students have been working on building the scenery for a while,” said Huntleigh Dodson, who organized the play. “We want every child to be a part of the play, because it is something they would get to experience at any other school.

“The parents enjoy seeing their children on stage, and it gives us a chance to work on things like speech skills with the students,” Dodson added.