Eagles down Jaguars inside packed gym 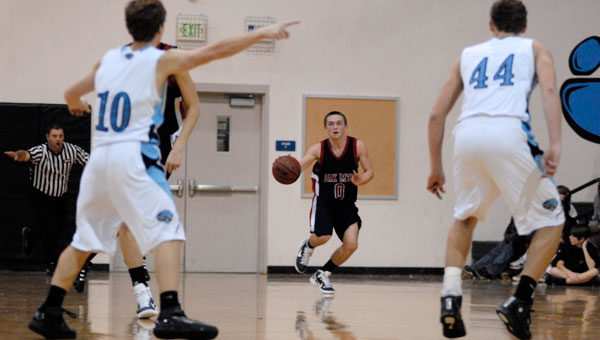 Oak Mountain High School senior guard Taylor Kral brings the ball up the floor against full-court pressure from Spain Park in the Eagles' 29-27 win over the Jaguars inside a packed gym Dec. 10. (Reporter Photo/Wesley Hallman)

HOOVER — Oak Mountain High School senior guard Jake Delaney was in the lineup late in the final minutes of a tight game against rival Spain Park inside a packed gym Dec. 10.

Not simply content with being on the floor, Delaney made sure he played an important role in the Eagles’ 29-27 win over the Jaguars. Delaney grabbed an offensive rebound with the game tied at 25-25 with less than two minutes remaining and then stepped to the line to knock down two free throws to stymy Spain Park momentum and eventually send the Oak Mountain crowd into a frenzy.

The moment almost never happened for Delaney, who was cut from the Oak Mountain basketball team as a freshman. Delaney’s role as a junior last season was to provide emotional support from the bench.

Not anymore. Delaney is making the most of his opportunity in his final season with the Eagles.

“We’re talking about a kid that was cut from the team as a freshman and didn’t play at all last season,” said Oak Mountain coach Chris Love. “He was just solid tonight.”

Delaney scored all five of his points in the second half to help the Eagles (5-4) erase a five-point halftime deficit against the Jaguars.

Senior forward Garrett Cosgrove played the biggest role for Oak Mountain, as he scored 11 of his 12 points after the break. The duo teamed up to take control of the game early in the second half, with Cosgrove giving the Eagles their first lead in the half and Delaney draining a 3-pointer to cap a 10-0 run by Oak Mountain to start the third quarter.

“The main thing is we settled down on offense,” Love said. “We were a lot tougher with the ball. We were able to execute the offense and get it to Garrett.”

The two teams struggled in the opening quarter as the Eagles and Jags combined for three total field goals. Oak Mountain carried a 4-3 lead into the second quarter.

Spain Park outscored Oak Mountain 9-3 in the second quarter, with two of the baskets coming off 3-pointers from Lawson and Martin, to take a 12-7 lead into the locker room at halftime.

The Eagles quickly erased the deficit in the second half with a 10-0 run. Oak Mountain pushed its lead to 22-15 by the end of the third period.

Spain Park hit 6-of-6 free throws down the stretch to claw its way back into the game. Lawson capped a 4-0 run by the Jaguars with two free throws to tie the game at 25-25 with 1:52 left in the game.

Delaney’s two free throws pushed the lead to 27-25 and Taylor Kral hit 1-of-2 free throws to give the Eagles a 28-25 advantage with 18 seconds remaining.

Martin’s 3-point attempt with 10 seconds left was off the mark and Oak Mountain secured the rebound to clinch the win.

Love said the atmosphere, which included two boisterous student sections, will help prepare his team for area competition. The Eagles and the Jags met in area play the past two seasons, including the Class 6A, Area 10 championship game last year, before the Alabama High School Athletic Association regrouped the teams in separate areas in its latest reclassification.

Spain Park coach Brian Moon said the Eagles were a good test for his youthful squad.

“We’re not the most experienced team,” Moon said. “We gave up some critical offensive rebounds in the second half. But we still have a chance to win the game.”

FROM STAFF REPORTS The Oak Mountain High School wrestling squad dropped a close match with Clay-Chalkville in a match between... read more