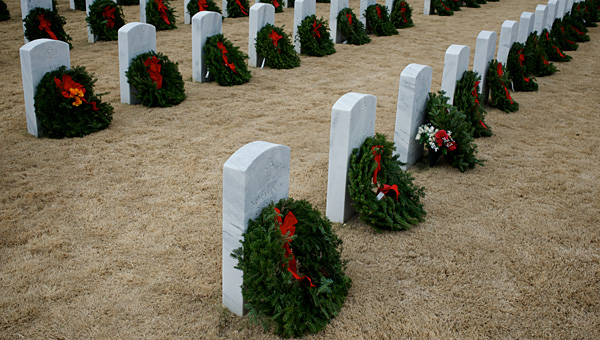 MONTEVALLO — Close to 800 holiday wreaths were laid on the gravestones in the Alabama National Cemetery Dec. 11 as a part of the national Wreaths Across America program.

The fresh wreaths were provided by The Blue Star Salute Foundation and the Bessemer Civil Air Patrol, who hosted the ceremony at 11 a.m.

“Today we show a national front of unity all across America as we remember the fallen, honor those who’ve served and teach our children the value of freedom,” said Capt. Selene Vaught of the Bessemer Civil Air Patrol. 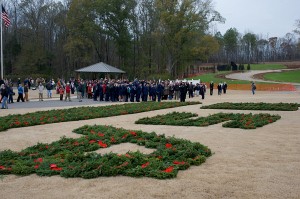 Friends and families of those buried at the cemetery line up to place the wreaths, which were arranged to spell out USA, beside the graves of their loved ones. (Reporter Photo/Jon Goering)

Before the individual wreaths were laid on the headstones, a short ceremony included the singing of the National Anthem, the playing of Taps and two flyovers.  Representatives from each branch of the military placed wreaths on display stands at the front of the cemetery.

“The wreaths symbolize our honor for those who have served and are serving and to their families who endure sacrifices every day on our behalf,” Vaught said.

The ceremony’s keynote speaker was Peggy Bourland of Trussville, who told the story of losing her husband while he was stationed in Haiti during the Jan. 2010 earthquake. 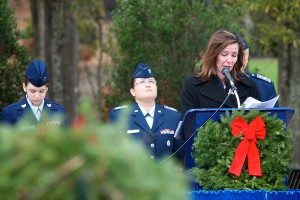 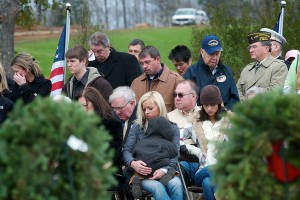 Friends and families of soldiers buried at the cemetery listen as Peggy Bourland describes the death of her husband in Haiti. (Reporter Photo/Jon Goering) 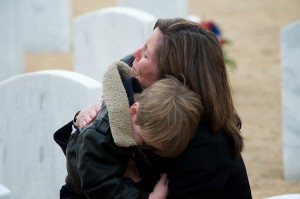 Peggy Bourland hugs her son, Charley, 3, whose father was killed while on active duty in Haiti. (Reporter Photo/Jon Goering)

Charon Rivers, of Hoover, said she was glad people still remember the veterans during the holiday season. Rivers’ son was the first solider buried in the Montevallo cemetery who was killed during combat in Afghanistan.

“I just think it’s a wonderful way to honor our fallen heroes and veterans who’ve served our country,” she said. “It’s a beautiful way to remember them during this holiday time.  It’s wonderful to know that people continue to remember and don’t forget.

“I never knew they did things like this,” she added. “I guess you have to live it to know and unfortunately, I’ve had to live it. “ 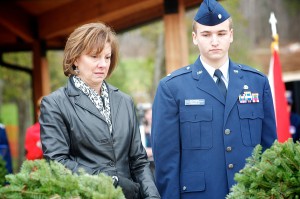 Hoover resident Charon Rivers pauses after placing a wreath on a stand during the ceremony. (Reporter Photo/Jon Goering) 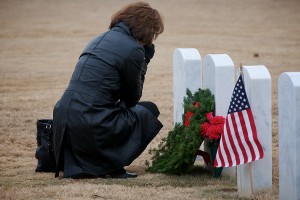 John Walker, a member of the Blue Star Salute Foundation, said the wreath-laying ceremony in Montevallo was made possible with the help of the community, who sponsored the wreaths at $15 a piece. He said the organization raised enough money through sponsorships to purchase all the wreaths this year with some left over to save for next year’s endeavor.