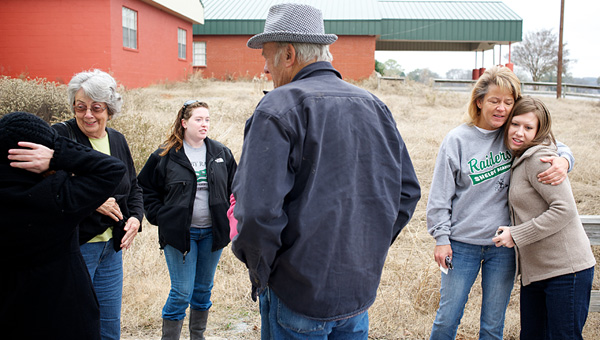 Alumni of Shelby Academy wait outside before being let in to claim memorabilia before the contents of the school are auctioned off. (Reporter Photo/Jon Goering)

CALERA — Both tears and hugs from reunited classmates could be found in the hallways of the abandoned Shelby Academy Dec. 11 as the board of trustees opened the school to alumni seeking keepsakes.

From 10 a.m. to 1 p.m., school alumni and parents from each generation of students filed three at a time into the two classrooms set up to hold the available mementos.

Trophies, class pictures, jerseys, banners, T-shirts and cookbooks lined the tables and plastic tubs in the classrooms. When someone wanted to lay claim to an item, they were asked to write their name and telephone number on the item’s designated paper. If more than one person signed up for the item, a random drawing of the names would decide the curator.

After perusing the two rooms, alumni were asked to return at 1 p.m. to pick up any items they were awarded. 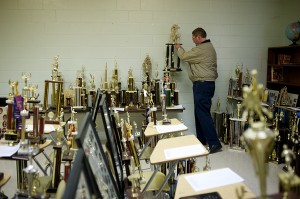 Shelby Academy 1987 alum Raymond Rivers searches for the third-place state trophy the team he was a member of won during his senior year at the academy. (Reporter Photo/Jon Goering)

Caitlin Wilke, graduate of the class of 2009, the school’s last academic year, was among the alumni present at the school Saturday. Wilke said she received a Facebook message from the school’s online alumni group informing her about the giveaway. She said she came in search of her old cheerleading trophies and uniforms.

“It feels weird being back here because I know I was the last person to graduate, to walk across that stage,” she said. “It’s just unreal.”

On Dec. 10, the Shelby County Board of Education approved the purchase of the Shelby Academy property and buildings for $1.3 million, announcing its plan to use the building as a Calera middle school.

Wilke said she was glad the building would continue to be a school and host new generations of students.

“I’m sad they couldn’t get more kids to come here, but I’m glad it’s going to be put to good use as a middle school,” she said. “I wish them all the best.”

Billie and Jigger Splawn also searched through both rooms of mementos looking for keepsakes for their children, they said. Billie said she and her husband helped build the school in 1969, before their children started classes in 1970, the school’s first year. She said she remembers laying tile in the entryway at 11 p.m. the night before the first day of school. Jigger said he did all the electrical wiring in the building. 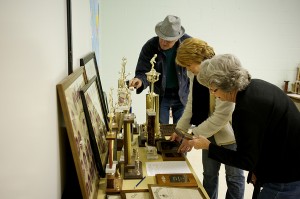 Both said they were disappointed Shelby Academy couldn’t reopen, but were glad their handiwork would continue to be used by future students.

“It’s sad sad,” Bille said. “It hurts our heart, but it does me good to know a school’s coming here. It’s not just going to fall in on itself.”

The school shut down before the fall 2009 semester, citing financial trouble. Despite repeated attempts to raise enough money to re-open the school, school officials recently made the decision to liquidate the building’s contents.

Items throughout the school that were not offered to alumni as keepsakes are being auctioned off online at Soldalabama.com. The auction will run through Dec. 15, and everything in the school will be listed on the site.

Connie Jones, Shelby Academy board of trustees’ president, oversaw the alumni giveaway Saturday along with other board members. Jones declined to comment at that time.