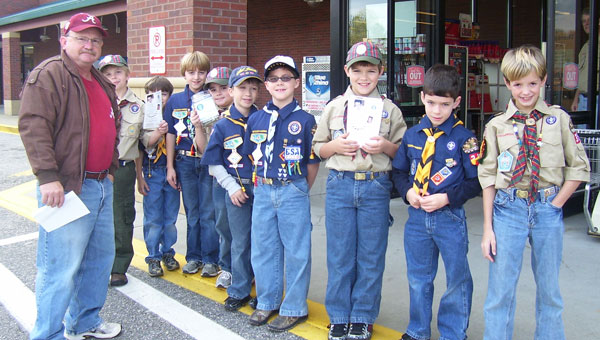 Members of Cub Scout Pack 353 enjoy community service projects such as this one where they collected donations to help with lighting for the Kampfire for the King Christmas Celebration.

A group of little, smiling faces greeted shoppers outside Chelsea Winn Dixie on a recent, beautiful fall Saturday morning, as a small hand held out a collection jar.

No, the child wasn’t asking for money for himself, but to help with the effort to fund a community-wide event. Members of Cub Scout Pack 353 were collecting money to help with lighting for Kampfire for the King Christmas Celebration at King’s Home.

Chris Brown, Web Master and Assistant Den Leader for Pack 353 Webelos I Den said collecting for Kampfire for the King was one of the pack’s many undertakings during this holiday season. The cubs do several different service projects in the community, Brown said, with one of their recent ones being for the Fire Department. The department hands out gift packs when they visit schools, and the boys stuff these.

They will also be leading the Dec. 18 Chelsea Christmas parade again this year, he said.

Cub scouting is one of Boy Scouts of America’s three membership divisions, and is presently largest of the three. It’s main purposes are physical fitness, character development and citizenship. But members and their families also have a lot of fun, as Pack 353 did at their recent Guntersville campout.

And from the looks of the bright smiles while collecting King’s Home donations outside Winn Dixie, they also enjoy service projects.

Cub scouting is designed for boys who are in the first grade through fifth grade, or who are seven to ten years of age. Pack 353 is divided into dens, which are groups of boys of the same age. Monthly meetings are held at Liberty Baptist Church in Chelsea.

For more information about cub scouting, Pack 353, or to contact leaders by email, visit the website at http://chelseacubscouts.org

Joyce Bulford of Blue Star Mothers of Alabama packs socks to be sent to deployed soldiers, while other members of... read more