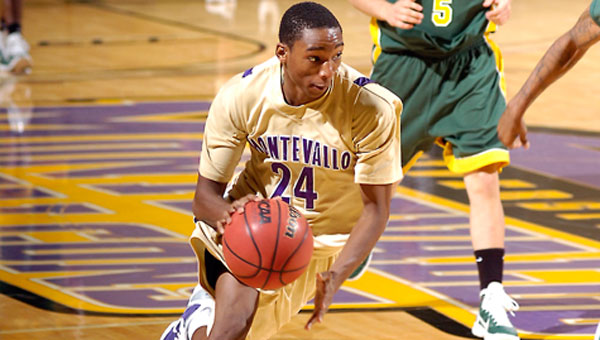 University of Montevallo sophomore guard Jonas Brown led the Falcons with a career-high 18 points in a 61-55 loss to Christian Brothers University at BankTrust Arena on Dec. 7. (Contributed)

The University of Montevallo men’s basketball team suffered its first loss of the 2010-2011 season Dec. 7 following a 61-55 setback to Christian Brothers University.

Montevallo, which recently moved up to No. 5 in the National Association of Basketball Coaches’ NCAA Division II poll, was led by redshirt sophomore Jonas Brown in the loss.

Brown led the Falcons (6-1) with a career-high 18 points as he hit 7-of-10 shots from the field, including one 3-pointer. Brown scored 16 of his points in the second half as the Falcons tried to rally from a 13-point halftime deficit.

Junior Antoine Davis chipped in 13 points as he hit 6-of-9 shots. Senior Cecil Coleman was the only other Montevallo player in double digits with 10 points. Coleman also led the team in rebounding with six boards.

Montevallo was able to force Christian Brothers into 22 turnovers while only giving up seven turnovers of their own, but it was not enough as the Buccaneers hit key 3-pointers throughout the game.

The Bucs started the game 6-of-6 from 3-point range and jumped out to an early 22-10 lead. The Bucs continued to build their lead throughout the first half as they only missed five shots the entire period.

With 3:39 left in the first half the Falcons found themselves down by 19. A pair of layups from junior Jervan Jackson and a pair of baskets from Coleman cut the lead to just 13 points at the break.

Six minutes into the second half, a layup by Brown cut the Bucs lead to just eight points. However, a couple of missed shots by the Falcons allowed the Bucs to regain a double-digit lead with just under 12 minutes to play.

The Falcons’ top-five ranking is Montevallo’s highest spot in the poll since Feb. 28, 2006 when they were ranked No. 4.

Montevallo is one of three Peach Belt Conference teams in the top 25. USC-Aiken is ranked No. 8. Augusta State comes in at No. 10.

The Falcons’ highest ever ranking in the poll is No. 1, which has happened six times in school history. All six of the Falcons’ No. 1 rankings came during the 2005-2006 season.

The University of Montevallo women’s basketball team continued to dominate its competition with interim head coach Brittany Godsey at the helm Dec. 7 by downing the Scotties of Agnes Scott College 72-34.

Harris finished with a team-high eight rebounds while hitting 5-of-8 shots from the field. Junior Tiffany McClure added eight points as well as a team-high five assists. McClure was 3-of-4 from the field, including 1-of-1 from 3-point range.

Montevallo shot 51.6 percent for the game while holding Agnes Scott to 22.6 percent. The Falcons also forced 27 turnovers, which turned into 34 of Montevallo’s 72 points.

The Falcons shot only 37.9 percent from the field in the second half but maintained a double-digit lead throughout the half.

Senior Elite is a prestigious honor, generally bestowed upon a graduating senior with the highest grade-point average in his or her particular field of study. They are typically a department’s most-outstanding student.

Dabbs was named the recipient for kinesiology. Dabbs has a 3.85 GPA and is scheduled to play his senior season this spring for the baseball team.

Gibson was named the recipient for sociology. Gibson has a 3.45 GPA and will be competing for the women’s golf team this spring.

Alex Terhar was named the recipient for chemistry. Terhar has a 3.68 GPA and just finished her senior season for the women’s soccer team this fall.

University of Montevallo junior Antoine Davis led the Falcons with 14 points in a 71-58 win over Lander University in... read more