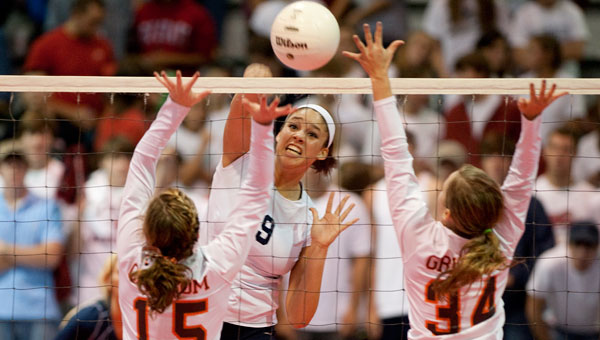 High school volleyball players dream of having a season like the one Oak Mountain senior Samantha Skinner had during the 2010 season.

Skinner, who will play collegiate volleyball next fall at the University of Alabama, not only posted eye-catching numbers as an outside hitter. Skinner’s statistics weren’t as impressive as her leadership during the Eagles’ run to the Alabama High School Athletic Association Class 6A state championship match.

Skinner’s impressive portfolio made her an obvious choice as the Shelby County Reporter Player of the Year in 2010.

Skinner is the cornerstone of a talented All-County team.

The 5-foot-11 hitter dominated on the front row for the Eagles, racking a school-record 808 kills during her 2010 campaign. Skinner averaged 4.7 kills per game in her final season at Oak Mountain.

The hitter only got better as the pressure increased, as Skinner recorded a season-high 26 kills in a region tournament win over Vestavia Hills. Skinner posted 22 kills in the Class 6A state championship match against Huntsville.

Skinner also increased her defensive ability as a senior. Skinner, who recorded 74 blocks, developing her back row skills by compiling 395 digs. Skinner was also an effective server as she racked up 41 service aces.