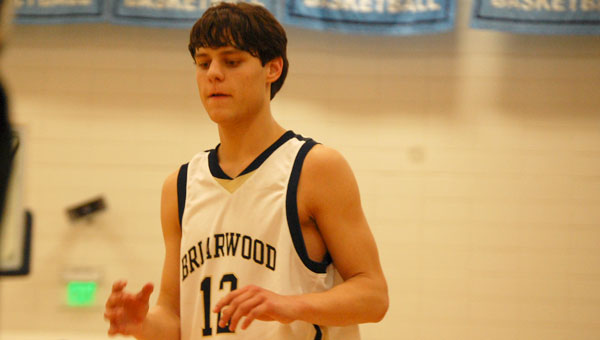 Briarwood Christian School guard Jason Laatsch receives an inbounds pass in the Lions' 65-60 win over Pelham in the opening round of the Shelby County tournament Dec. 17. (Reporter Photo/Wesley Hallman)

CALERA — Briarwood Christian School boys’ basketball coach Chris Laatsch didn’t panic when Pelham erased an eight-point first half deficit and took a one-point lead over his Lions entering the fourth quarter of a matchup in the first round of the Shelby County tournament Dec. 17.

Laasch was disappointed his team couldn’t stave off a run by the Panthers, but he knew the Lions would make a push in the final minutes. The Pelham lead was short-lived, as Briarwood guard Nathan Fincher nailed a 3-pointer early in the fourth quarter to lift the Lions to a 65-60 win over the Panthers at Calera High School.

Fincher gave the Lions a 51-49 lead with his 3-pointer. Canon Smith scored two baskets and Justin Bice hit four free throws in the final minute to seal the win.

“When (Pelham) took the lead it was a little disappointing,” Laatsch said. “We continued to battle back and made enough plays to win.”

Luke Collins, who didn’t score a point, led the Lions with nine assists.

The Panthers hit 13-of-19 free throws in the loss.

Laatsch scored a layup and converted a three-point play with a free throw and Bice added a layup late in the second quarter to help the Lions take their largest lead of the game at 32-24.

The Panthers went on a 9-2 run to end the third quarter. Minyard stole the ball and nailed a 3-pointer on the other end of the court to give Pelham its first lead of the second half at 45-44 late in the third quarter.

Williams gave the Panthers their final lead at 58-57 following a free throw with just more than a minute remaining in the fourth quarter. Briarwood ended the game with an 8-2 run in the final minute.

FROM STAFF REPORTS The Briarwood Christian School girls’ basketball team defeated Chelsea 46-34 in the opening round of the Shelby... read more