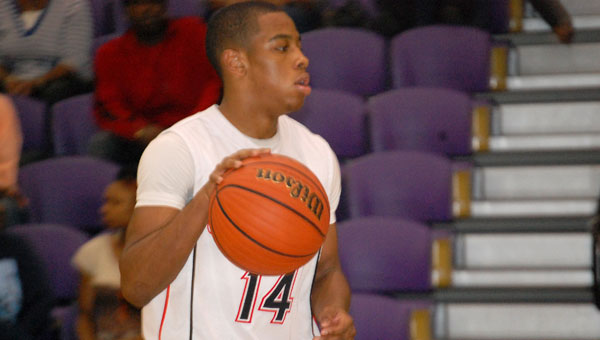 The Thompson High School boys’ basketball team used an impressive run in the final 12 minutes to finish off Vincent in a 49-40 win over the Yellow Jackets in the Shelby County tournament Dec. 18 at BankTrust Arena on the University of Montevallo campus.

The Warriors finished the game with a 17-4 run to run past Vincent in a rematch of the Chelsea High School Thanksgiving tournament championship game.

Thompson advanced to face a rubber match with Calera in the tournament semifinals Dec. 20 at 4:30 p.m. The Warriors, who fell on the road at Calera earlier in the season, defeated the Eagles at home Dec. 16.

“It should be interesting on a neutral court,” said Thompson coach Patrick Davis.

Jaylon Jones led Thompson (8-5) with 11 points in the victory over Vincent.

The Eagles will meet Briarwood Christian in the semifinals Dec. 20 at 1:15 p.m.

The Cornerstone Christian School boys’ basketball team fell to host Autauga Academy 58-45 in the final game of its tournament Dec. 18.

The Eagles will meet Thompson in the semifinals Dec. 20 at 6 p.m.

The Thompson High School girls’ basketball team picked up a 53-40 win over Montevallo in the Shelby County tournament.

Abby Letson scored 23 points to lead Evangel, which improved to 8-0 on the season. Letson scored 15 points in the second half to help the Lightning erase a 30-28 halftime deficit.

FROM STAFF REPORTS The Briarwood Christian School girls’ basketball team defeated Chelsea 46-34 in the opening round of the Shelby... read more