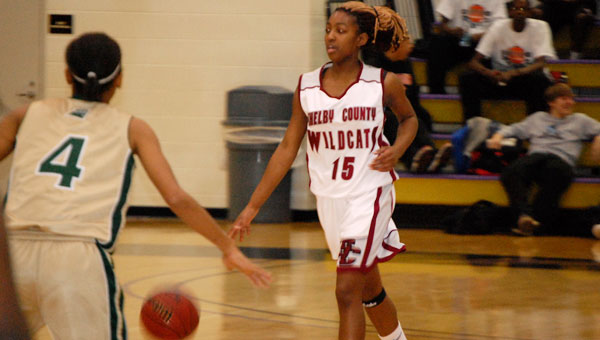 Lewis is too versatile to simply hang out on the perimeter or bang her way around in the low post. The veteran player is more than capable of doing both.

Shelby County girls’ basketball coach Brandi Steed uses a term from another sport to describe Lewis, who helped the Wildcats advance to the Shelby County tournament semifinals Dec. 18 following a 52-37 win over Pelham at BankTrust Arena on the University of Montevallo campus.

“Alexis is a utility player,” Steed said. “She makes an easy transition from guard to forward.”

Shelby County will face Briarwood Christian in a tournament semifinal Dec. 20 at 2:45 p.m.

Lewis used her quickness on the perimeter as an advantage in the first three quarters before dominating in the paint in the final period to rack up a game-high 21 points in the victory.

Aulicia Nunn added 12 points for the Wildcats, who improved to 11-1 following the win. Alysia Perkins chipped in eight points.

Dawson finished with eight points in the first half to help the Panthers maintain a lead for the majority of the first 16 minutes. Her free throw early in the third quarter gave Pelham its largest lead in the contest at 28-23 before Shelby County took control of the game.

The Wildcats erased the deficit by the end of the third quarter and Lewis went on a personal 9-0 run midway through the fourth quarter to seal the win.

Steed said her team, led by seniors Lewis and Perkins, is on a hot streak.

“The girls are just enjoying winning,” Steed said. “They want to get to 20 wins.”