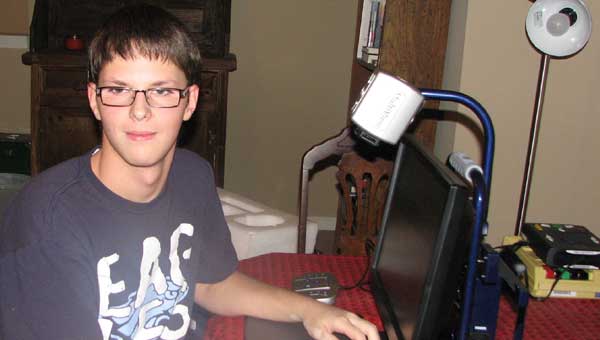 Nikoal Saric uses his new vision aid to study at home for the first time. (Contributed)

CALERA — When 15-year-old Nikoal Saric arrived in Calera this August from Serbia, he was 80 percent blind and couldn’t read his textbooks without holding them an inch from his face.

Now as a foreign exchange student at Calera High School, he’s receiving help from the community to be able to see clearly for the first time.

Lee Ann Parker, Saric’s exchange program coordinator at Calera High School, said Sight Savers America delivered a delivered a vision aid to Saric Dec. 8 for him to use during his stay in Alabama.

The vision aid, a closed circuit television magnifier (CCTV), is one of the most popular, but costly, vision aids available to kids who are legally blind, Parker said. The CCTV allows the user to magnify an object up to 75 times what they can normally see, she said.

Calera High School has a CCTV that Saric was borrowing since he arrived in August. However, the vision aid is large and was cumbersome for Saric to transport, she said.

“He was having to carry it on the bus and it’s quite a large piece of equipment,” Parker said.

With the CCTV from Sight Savers, Saric will be able to use the school’s aid while at school and the Sight Savers aid while he’s at his host home in Calera, Parker said. The new CCTV is also much more advanced than the one he was using at school, she said. It will allow him to read and study with ease as well as watch TV .

“When Sight Savers brought the new equipment he said it was much better than the one he had at school,” Parker said.

Linda Long, communications director at Sight Savers America, said the organization didn’t want to miss a chance to help a child see. Though the donations raised by the organization are used to provide vision aids to kids in Alabama, Long said the staff thought the least they could do was provide a CCTV for Saric to borrow while he’s here.

“It’s truly amazing the difference a piece of equipment can make in a child’s life,” she said. “It gives them more self-esteem and makes them feel less different.”

With the help of the community, Parker is attempting to raise money to purchase a CCTV for Saric to take back to Serbia with him in May, she said.

Until Saric arrived in the United States, he had never used a vision aid before, Parker said. In Serbia, he attended a school for the blind and applied for the scholarship to become a foreign exchange student despite his vision problems.

“He’s very smart, he just has this vision problem,” she said. “He never knew this kind of equipment existed. He had never seen one before. If he could take one home with him it will make him able to function more and learn more.”

Saric’s scholarship will cover a portion of the price of a CCTV, but will be short about $1,500, Parker said. Parker is seeking help from the community to cover the remaining cost through donations.