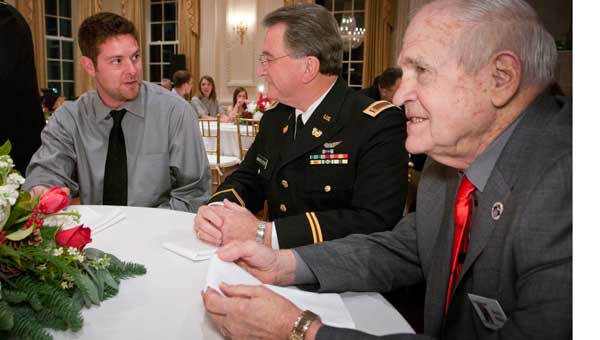 MONTEVALLO —  Boatright Railroad Products in Montevallo chose a non-traditional way to honor veterans and active military personnel this year, by providing them some holiday cheer at the company’s annual Christmas party.

Every year Boatright Companies, a railroad industry supplier, hosts a Christmas party for the employees at each of its companies, said Shane Boatright, Boatright Companies CEO and president. This year the company invited veterans and their families to join the party at American Village Dec. 17, he said.

“I thought in some way we’ve got to be able to recognize these people and have veterans of all wars there and salute them for their duty,” he said. “We hear about our brave men and women still over there fighting a war. We get so caught up in our economic situation and we forget there’s still people fighting for our freedom.”

Boatright said by inviting veterans and their family members, he hoped to honor his employees who have served and show non-employees the company’s appreciation. He said the company worked with the Veteran’s Administration to help get the invitation out to area veterans and family members of those buried in the Alabama National Cemetery.

The party included dinner, live music and many holiday festivities, Boatright said. During Boatright’s address to the employees, he asked all veterans and their family members to stand to be recognized.

“They received a standing ovation,” Boatright said. “It couldn’t have been any better. It was really great to see all the veterans together. I didn’t know any of them personally, but I do now. They truly are our heroes.”

Lt. Co. Kevin Schiller, a commander in the United States Air Force, attended the Boatright Christmas party as a veteran of Operation Iraqi Freedom and Operation Enduring Freedom. Schiller said he’d never received such an invitation before, but was honored to attend the company’s party.

“I thought it was a great opportunity that we normally don’t have to interact with people,” he said. “It was a very genuine support for veterans and was much appreciated.”

Boatright said he wanted to honor the veterans and their families not because of the Christmas season, but because they deserve recognition year-round. Boatright said the Christmas party just happened to be the perfect event and venue for the company to express its appreciation.

“I think every day we should be thankful they’re keeping us free,” he said.