Holding on to her faith 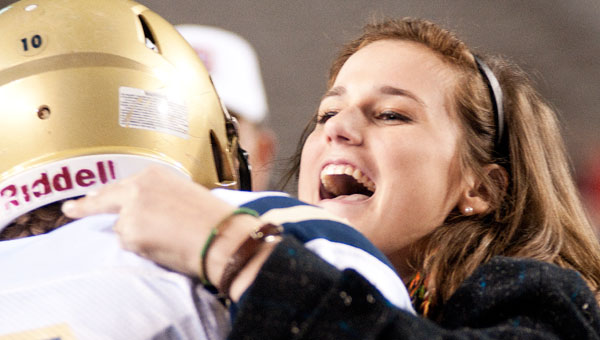 MK Fletcher hugs Caleb Ward during the coin toss before the start of the 5A State Championship game. (Reporter Photo/Jon Goering)

HOOVER – Even though MK Fletcher is naturally right-handed, these days she stretches out her left hand to greet people. She writes left-handed and eats left-handed. She has to, because her brain has forgotten how to use her right hand.

MK, dressed in Christmas colors with a red cardigan and a green-and-white shirt, is a bright, bubbly 18-year-old senior at Briarwood Christian School. She plans to head to UAB next year to begin her studies in clinical psychology. However, five short years ago, her family wasn’t sure she’d ever make it to college.

Christy Fletcher, MK’s mom, said when MK was 13, she began having headaches and experiencing issues with her vision. Doctors weren’t able to figure out what was wrong with her, and the summer after her eighth grade year, she began sleeping excessively and losing weight – fast. She lost 16 pounds in two weeks.

“We thought she had mono,” Christy said. “Then one day she woke up from a nap dragging her right side like she had had a stroke.”

After doctors examined MK again, they determined she had a brain tumor the size of a lime. At first, the prognosis was grim.

“They thought she wouldn’t make it but a few months,” Christy said. 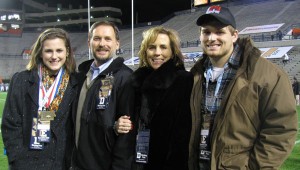 MK went into brain surgery July 24, 2007 at 14 years old. Her surgery was supposed to last four to five hours, but she had a stroke while she was on the operating table. Finally, nine hours after surgery began, she was done.

Although she had very limited movement on her right side after the surgery, she improved rapidly and was able to leave the hospital after two weeks.

However, the nightmare wasn’t over for her family.

In October 2007, MK began losing her strength, increasingly becoming weaker and weaker. She was also in constant pain, and simply changing positions or moving became impossible. In December, she went back into the hospital, where she would stay for 45 days while doctors scrambled to figure out what was wrong.

Finally, the doctors discovered that MK had symptoms of several autoimmune diseases.

“All of your nerves get fried,” Christy said. “She had to regrow the nerves around her spine.” 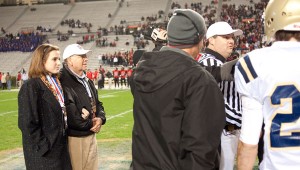 MK Fletcher stands at the 50 yard line during the coin toss before the start of the 5A State Championship game on Dec. 2. (Reporter Photo/Jon Goering)

MK also underwent six months of chemotherapy to help her recovery. It was a long, painful process, full of setbacks and rehab, but she finally made it back to normalcy, Christy said.

“Your brain figures out different ways to do what you would normally do,” Christy said.

MK said even her right hand will eventually return to normal. Until then, her left hand will suffice.

“The first couple months, my handwriting was not legible. But I’ve gotten pretty good with it,” she said. “They said I’ll have 100 percent full recovery. It’ll just take time.”

MK said dealing with her body’s troubles has taught her the value of sympathy and thankfulness.

“I definitely have a lot more sympathy, like if I see somebody in a wheelchair. I know what that’s like,” she said. “Just walking across the room. I don’t take that for granted, because I didn’t have that.”

Christy and Bart, her husband and MK’s dad, wrote a book together titled “Holding Her Mat,” about MK’s physical and spiritual journey.

The book uses Christy and Bart’s journal entries during MK’s hospital stays to show how the family made it through their experience.

The book, along with their faith and the support of family and friends, has helped the Fletchers stay strong and positive.

“One of the most important things is how much we depend on our faith. We really feel like everyone was holding us up,” Christy said. “I can’t imagine where we’d be if we didn’t have our faith.”

MK was selected to be an honorary captain for the Briarwood Lions football team during the Class 5A state championship game. Christy said the football players, along with other Briarwood athletes, look to MK for inspiration.

“Several of the athletes have come up and said, ‘When I was trying to make that last tackle on the football field or run that last mile and I think I can’t go on, I think of MK and all that she does,’” Christy said.

MK said her situation has helped others come to tough — but essential — realizations.

“My school, because it is private, a lot of the kids are better off,” she said. “It’s made them realize this could all be taken away in a second.”

For more information on MK and her family or to order their book, visit Holdinghermat.com.