Relics from the holy land 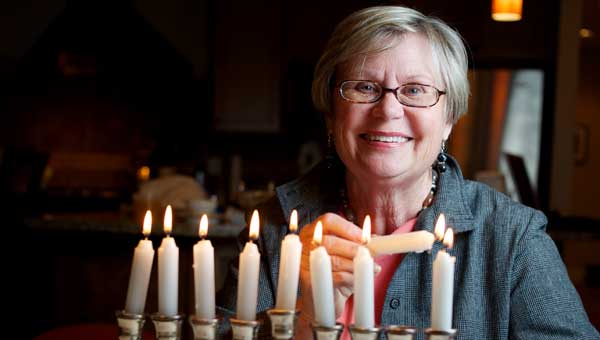 Olivia Kalin demonstrates lighting her menorah that she brought home from her travels in Israel. (Photo/Jon Goering)

Every December, Olivia Kalin relives some of her favorite memories as she celebrates Hanukkah, the eight-day Jewish festival of lights and dedication. Kalin, of Wilsonville, has a collection of menorahs, two of which she brought back from her travels to Israel. These two have special meaning to her because of their connection to the holy land, Kalin said.

The first is a large silver menorah she purchased from a silversmith while in the holy land with her husband. The second is made of hammered steel and is a more traditional oil-burning menorah that is lit using floating wicks.

The ceremonial lamps have become heirlooms in the family, Kalin said. Both are treasured parts of the family’s Hanukkah celebration, a holiday Kalin said is often misunderstood.

In 2010, Hanukkah was celebrated Dec. 1-8, Kalin said. The eight-day celebration commemorates the victory of the Maccabees over the armies of Syria and the subsequent rededication of the Temple in Jerusalem, she said.

Technically, Hanukkah is a minor Jewish holiday, but often gets overemphasized because of its close proximity to the major Christian holiday of Christmas, Kalin said.

“Hanukkah is not mentioned in the Bible and is not a traditional religious holiday,” she said. “There’s a lot of misconceptions because Christmas is so large, the idea is that Hanukkah is just as large and it’s not. Everyone always says ‘Merry Christmas and Happy Hanukkah.’ Well, the weight is not the same.”

Hanukkah is a much smaller celebration compared to the Jewish holidays of Passover and Yom Kippur, Kalin said. However, it has many of its own traditions and festivities that make it a favorite for children each year.

Each of the eight nights, a candle is lit on the menorah, Kalin said. A present is given to family members each night, which can often cause problems with young children, she said.

“The poor old kids, what are you going to do?” Kalin said. “You give a child one present every night for eight nights and by the ninth night they’re going to wonder why they stopped getting presents.”

On the last night of Hanukkah, the family traditionally lets the candles burn until the end, Kalin sad.

“By the time you get to all eight, it’s a beautiful thing,” she said.

Kalin said her collection of menorahs is not unusual. Most Jewish families have more than one and the ceremonial lamps are often given as gifts for bar mitzvahs and bat mitzvahs.

Menorahs from Israel stand out in collections because of their rarity and originality, Kalin said.

“I guess for many it’s the sentimental value,” she said. “You go over there and you’re absolutely overwhelmed with the antiquity of Israel. It brings out the Jewish roots.”

For Kalin, who grew up Christian and converted to Judaism when she married, Hanukkah and the menorahs have even more of a special meaning.

“I struggled to find a religion that was meaningful to me,” she said. “Something I could feel connected with intellectually, philosophically and emotionally. When I went into the synagogue for the first time, it was like I was home.”

Holding on to her faith

MK Fletcher hugs Caleb Ward during the coin toss before the start of the 5A State Championship game. (Reporter Photo/Jon... read more