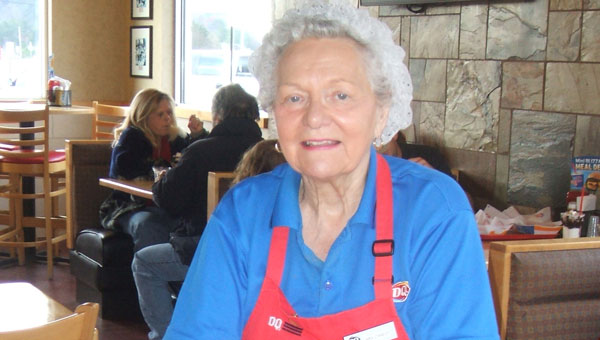 Mildred Dimon, 76, works at keeping things neat while spreading cheer, not only during the Christmas season, but year-round at Chelsea’s Dairy Queen.

“This woman, who is from generations past, fits in among the youth who are nearly three times younger,” said Mark Olis. “She’s fast on her feet and fast with a reply.”

He was speaking of 76 year-old Mildred Dimon, whom he watched perform her duties as hostess at Dairy Queen in Chelsea.

She was gathering trash, cleaning tables and greeting people when a teenage boy came in, greeted the young people who work there and asked Mrs. Dimon how she was doing.

Without hesitation Dimon answered smartly, “Ain’t nothing shakin’ but the leaves on the trees.”

Her good humor and cheerful attitude appeared to be infectious as she continued about her work, leaving several restaurant patrons laughing at her quick wit.

Dimon said she retired in 1999 after working at a computer for 26 years for Vulcan Binding and Cover. But it didn’t take long for her to realize that hanging around the house all day was not for her. So, when she saw activity at Dairy Queen’s new building in Chelsea, she stopped and asked about a job.

“You can be my hostess,” a company rep told her.

That was eight years ago, and she’s been greeting patrons with her big smile and sunny disposition ever since. She loves being out with people and she loves what she does, Dimon said.

And it shows in her attitude.

Lacey Griffin, a young, single woman, who knows Dimon from the Dairy Queen and on a personal level, said she always has a positive attitude and a ready smile. “She never fails to give me a hug and ask about my family. I hope that when I get to be her age, I will be as cheerful and positive as she is,” Griffin said.

Olis said he first noticed Dimon because of her apparent age and work ethic. But he also admired her for her will to be among people and take part in the community.

If you are worn out from Christmas shopping and feeling down and frustrated by prices in the stores, you might want to stop by Dairy Queen in Chelsea one afternoon between 2 p.m. and 6 p.m., and let Mrs. Mildred Dimon brighten your spirits.

And you can count on her cheerful greeting after Christmas has passed, too.

Members of Cub Scout Pack 353 enjoy community service projects such as this one where they collected donations to help... read more