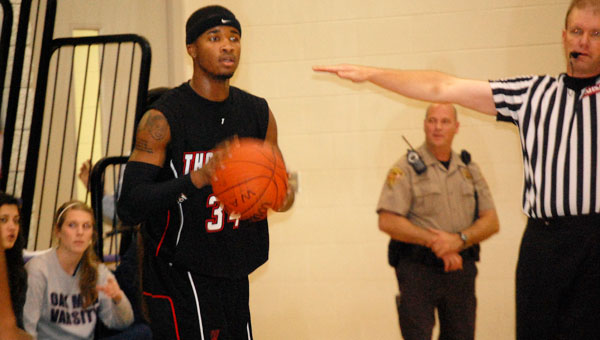 MONTEVALLO — Thompson High School boys’ basketball coach Patrick Davis wasn’t surprised to see Calera hang around in the second half of a semifinal matchup Dec. 20 in the Shelby County tournament.

With Calera junior guard Deondre Haynes in the game, Davis knew the Eagles would put up a fight inside BankTrust Arena on the University of Montevallo campus.

However, Davis knew he had an answer in the form of his own junior guard, Demarcus Threatt.

Threatt scored a game-high 26 points to lead the Warriors to a 73-66 win over the Eagles. The victory, which was the Warriors’ second win over Calera this season, clinched a spot in the Shelby County tournament championship game.

The agressive Threatt came up with 21 points on big baskets and free throws in the second half to hold off the Eagles.

“We knew we had to attack the rim,” Davis said. “Layups and free throws win games. Demarcus is the best we’ve got at getting to the rim.”

Thompson will meet Briarwood Christian School in the championship game Dec. 21 at 6 p.m.

Jaylon Jones added 14 points for the Warriors, who improved to 9-5.

The Warriors, which held a 10-point lead following a Threatt 3-pointer in the first quarter, took a 33-31 advantage into the locker room at halftime following a floater by Elisha Neville at the buzzer.

However, three free throws by Threatt and a 3-pointer at the buzzer by Coleman gave Thompson a 53-50 lead entering the fourth quarter.

Calera rallied to tie the game at 57-57 following a layup by Sumrall. Threatt put the game on ice with a layup and 3-pointer back-to-back to push the lead to five points midway through the fourth quarter.

FROM STAFF REPORTS The Thompson High School wrestling team picked up a 48-25 win over Robert E. Lee in a... read more