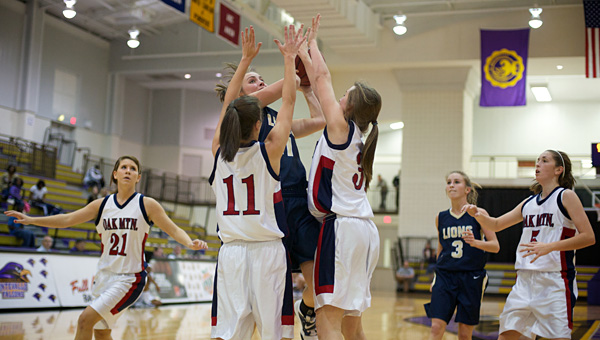 Briarwood's Anna Handlin goes up for a shot in traffic during the Lions' victory over Oak Mountain on Dec. 21. (Reporter Photo/Jon Goering)

Brown, who led the Lions to a tournament championship in 1997, decided to hang a banner inside the Briarwood gymnasium to mark the occasion.

The Lions will have to make room for another piece of cloth following Briarwood’s 43-31 win over defending Shelby County tournament champion Oak Mountain in the championship game Dec. 21 at BankTrust Arena on the University of Montevallo campus. 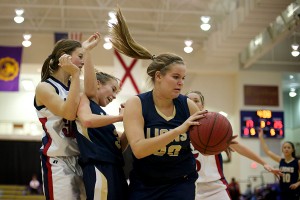 “I know how hard it is to win this tournament,” Brown said. “This is big for our team.”

Briarwood senior forward Anna Handlin and point guard Cara Medders teamed up to lead the Lions to the tournament title. 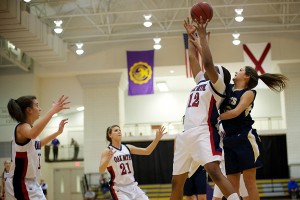 “Anna had an unbelievable third quarter,” Brown said. “She took over on offense and made big shot after big shot. She was also guarding the other team’s best player. That’s no easy task.”

Handlin helped Briarwood (13-3) get the lead. Medders made sure the Lions kept it.

Medders, who finished with 14 points, hit 11-of-12 free throws down the stretch.

“We’ve just got to get the ball in Cara’s hands,” Brown said. “She’s just knocking the free throws down.”

Watts, who left the game with a bruised knee with 12 seconds remaining in the fourth quarter, scored 25 of the Eagles’ 31 points.

“It was kind of an unassuming 25 points,” said Oak Mountain coach Donald Clayton. “She’s always capable of doing that.”

Maegen McDanal, Hannah Griffin and Madison Pierce scored two points each for the Eagles, who fell to 11-3 overall.

Watts scored nine of her 25 points in the first half to keep Oak Mountain within striking distance as the Lions held a 17-13 lead at the break.