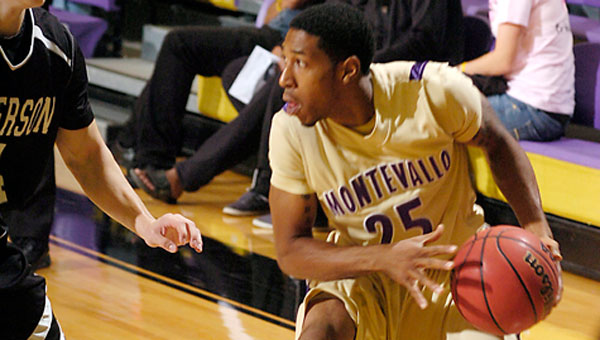 The Falcons (7-1) dominated from start to finish as they forced 22 turnovers and held St. Augustine’s to just 36.2 percent shooting. Montevallo shot 47.2 percent from the field, including 50 percent from 3-point range.

Montevallo, ranked No. 12 in the latest National Association of Basketball Coaches’ Division II poll, was led by senior Cecil Coleman, who scored 15 points while hitting 6-of-10 shots.

Junior Ryan Westbrooks chipped in 12 points while hitting a pair of 3-point shots. Junior Jervan Jackson was the only other Montevallo player in double figures with 10 points.

Senior Ronald Severtsgaard and junior Antoine Davis tied for the lead in rebounding with seven each. They also scored seven points each. Davis also led the team in assists with five.

The Falcons never trailed in the game as they opened up with back-to-back 3-pointers from Brown to take a 6-2 lead. Montevallo’s largest lead in the first half came at the 3:41 mark as Davis hit a layup to give the Falcons a 33-19 lead and 14-point advantage.

Saint Augustine’s was able to cut the Falcons’ lead to 12 as time expired in the first half.

Montevallo’s largest lead of the game came at the 9:04 mark as Coleman hit a pair of free throws to give the Falcons a 24-point lead.

Saint Augustine’s was able to cut the lead to just 13 points late in the second half, but that would be as close as they would come.

The Falcons (4-5) led most of the first half, but the Railsplitters were able to take the lead late in the period and hung on the entire second half as they hit key shots down the stretch.

Montevallo was led by junior Tiffany McClure and senior Jessica Collins, who scored 14 and 12 points, respectively. They also finished first and second in rebounding with seven and six, respectively. Junior Shavonne Seymore also chipped in six rebounds to tie with Collins.

The Railsplitters finished the period with a pair of free throws and a layup to head to halftime with a five-point advantage.

The second half was the exact opposite of the first, with Lincoln Memorial in control and the Falcons playing catch-up.

With 5:40 left in the game, Collins hit a 3-pointer to cut the Lincoln Memorial lead to just two points. Montevallo was unable to convert on the next three possessions, which allowed the Railsplitters to maintain control.

A jumper by Collins at the 2:37 mark once again cut the lead to just two points. Lincoln Memorial missed just one shot from that point on and did not turn the ball over as they went on to outscore the Falcons 6-4 in the final 2:30 to hang on for the victory.

The event will take place Saturday, Jan. 29 from 11 a.m. to 1 p.m. Clinic topics will include throwing, hitting, infield play and pitching mechanics.

The coaching staff invites all youth, little league and high school baseball coaches to attend. All coaches are invited to stay and watch the Montevallo baseball team practice at 1 p.m.

University of Montevallo sophomore guard Jonas Brown led the Falcons with a career-high 18 points in a 61-55 loss to... read more