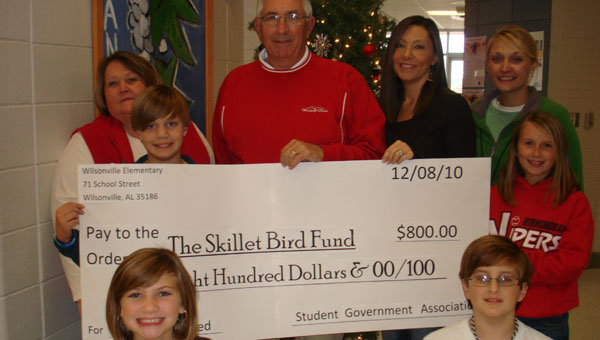 Skillet Bird placed jars all around the Columbiana area for years to collect money to buy toys for needy children. For decades this was Skillet Bird’s own unique ministry, which he became known for the Skillet Bird Toy Fund.

The Luther Fowler Men’s Class, which was his Sunday school class at Columbiana United Methodist Church, later took part in the ministry making it much bigger.

Today, many people throughout the community and schools are getting involved and it has grown greatly.

The Skillet Bird Toy Fund actually begins collecting donations in November of each year for the following year to come. They have worked really hard recently on providing a good Christmas for families in need around the area, and many members at Columbiana United Methodist Church have made traditions out of shopping for these families each year.

“It is a wonderful feeling to help those who are less fortunate,” said Maria Tidmore, who has been part of the Skillet bird ministry herself for many years and says it is very close to her heart.

Sometimes the Skillet Bird Fund can even help those who are just going through a rough time at the moments, and those families often pull through and are able to contribute to others the next year when they can.

Wilsonville Elementary Student Government Association and Marlana Hodo agreed for the second year in a row to give to the Skillet Bird Toy Fund project. The group donated all the money raised in memory of John E. Jones last year and collected more than $1,200. John E. Jones played a big role in the Skillet Bird Ministry for decades, and both he and his wife, Jane, worked hard to make sure needy children in Wilsonville, Shelby and Columbiana were given a special Christmas.

This year, students had a Penny War to help raise money for this mission. They were able to raise $800!

“The students were so excited about bringing pennies to school each day. The competition between the classrooms was pretty intense,” several teachers said.

On the last day of their competition the students brought in $150 worth of pennies to go toward the fund. The teachers and staff all agreed they were very excited and that is was quite a challenge to get all the pennies rolled and to the bank. Everyone who had any time to spare came by the office to assist the wonderful office staff Rita Paper, Susan Barringer and Angela Horton in rolling all the pennies.

Joe McCormick and Clyde Aycock actually made a trip to the school to thank all the students for their donations.

Marlana Hodo, the SGA sponsor, and Rosemary Liveoak, the principal, each SGA officers presented Evan Major and Holli Argo with a giant check for $800.

“This project has given our students the opportunity to learn the wonderful spirit of giving. The students are now collecting canned goods and non-perishable items to be donated to a local food pantry.  It is so amazing to see our students so excited about helping others in our community!” Maria Tidmore said.

Agnes Pool of Wilsonville has loved making one of her favorite hobbies into a local cottage business out of her... read more