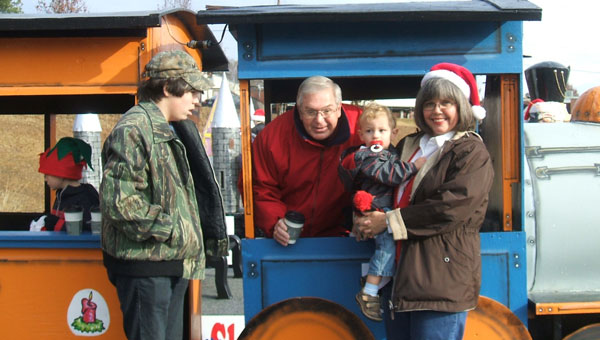 Braving ice and rain, thousands of people lined Shelby County 47 from the elementary school to Winn-Dixie in Chelsea, to watch dogs, donkeys, trains and floats of numerous other design — and bearing hundreds of people — parade past. Automobiles of every kind lined side streets, parking lots and the main road.

It was the city’s 11th annual Christmas parade.

Thankfully, the weather cleared just before time for parade festivities to begin. Wayne Morris headed up pre-parade music. WBRC Channel 6 Chief Meteorologist J.P. Dice and Tiffany Bittner, also of Channel 6, officiated from the stage set up on the back of a large flatbed truck.

A second large truck gaining a lot of attention was the float constructed by members of the Chelsea Community Church (CCC) congregation. Dozens of adults and children rode on the float with a giant “birthday cake,” balloons, streamers, a large banner reading “Happy Birthday Jesus,” and another wishing Chelsea a merry Christmas. For the second year in a row, CCC, with Lead Pastor Greg Davis, won the Mayor’s Award for the best float constructed by amateurs.

Even though the sun peeped out from time to time, elementary school-age sisters, Lily and April Christian, said they got cold “a little bit.” But, they still enjoyed riding on the “baton float,” they said, from which they waved and threw candy.

Richard Daffron’s family arrived at the parade’s starting point in time for his wife Janis and two young grandsons, Cameron and Marlin, to climb aboard the CCC float. He found a good parking spot to watch the parade, from the bed of his pickup with his young granddaughter Ginger.

The McCrorys arrived at the parade site just after 9 a.m. and parked in the Winn-Dixie parking lot, from which they walked to Shelby County 47. Larry said spectators lined the road three- and four-deep, but they still had a good view of the parade.

According to Mayor Earl Niven, 72 floats participated. He noted that there are a lot of people involved in putting on the parade each year, both behind and in front of the scene. “Keith Roberts was organizer and did an outstanding job. He has been organizer for all 11 years,” Niven said. “I think this was one of our best organized.”

Mildred Dimon, 76, works at keeping things neat while spreading cheer, not only during the Christmas season, but year-round at... read more