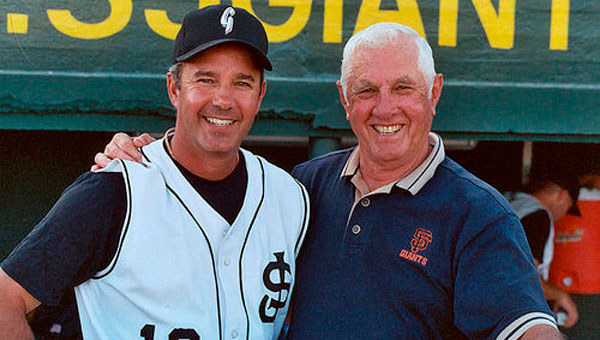 Jim Davenport, affectionately known as “Peanut,” spent more than half of his life in Major League Baseball as a player, coach and a member of the front office in the San Francisco Giants organization.

Davenport came close to reaching the pinnacle of the sport, helping lead the Giants to the World Series in 1962 as the team’s starting third baseman. Despite a Gold Glove award and an All-Star game appearance that season, the Siluria native’s dream of being a world champion ended with a 1-0 loss to the New York Yankees in Game 7 of the World Series.

Now a special assistant in player development in the Giants’ front office, Davenport finally got his wish when the Giants defeated the Texas Rangers in the 2010 World Series.

Davenport, who currently serves as a roving instructor and a special assignment scout for the Giants, thought the World Series was a long shot at the beginning of the 2010 season.

“I thought we had a chance to win the (National League West) division,” said Davenport. “But you could have taken it to the bank that we wouldn’t be world champions. It was a great season. Everyone on the club contributed.”

Davenport, who played football and baseball at Thompson High School before embarking on a college playing career at Southern Mississippi University in Hattiesburg, Miss. in the early 1950s, started his path toward the championship when he signed a minor league contract with the Giants after his junior season at Southern Miss in 1955.

Davenport and fellow Siluria native Willie Kirkland debuted with the Giants in the 1958 season, their first in San Francisco.

In his first year, Davenport appeared in 134 games, averaging .256 in 434 at bats with 12 home runs and 41 runs batted in. He also led the league with 17 sacrifice hits and set records for consecutive games without an error (97) and for initiating two double plays in a single game.

He had his best season four years later, batting .297 with 14 home runs and 58 runs batted in over 144 games for the World Series-bound Giants. Davenport won one of his seven Gold Gloves and was on the roster for two All-Star Games that season. Davenport singled to left field in his sole at-bat in the World Series in Game 1 of the series against the Yankees.

Davenport played alongside Willie Mays for his entire career. He also became close friends with slugger Bobby Bonds, who joined the team in 1968.

Davenport was released following the 1970 season. His career totals over 1,501 games included 77 home runs, 456 runs batted in and an .258 batting average.

After his playing days, Davenport went into coaching.

Davenport has worked for four MLB franchises over the years, including San Diego, Philadelphia, Detroit and San Francisco. During his coaching career, Davenport has been a coach, manager, hitting instructor, third base coach and advance scout.

In 1985, Davenport was given the job of managing the Giants, but was replaced by Roger Craig after the team finished with a 56-88 record.

Davenport returned to the San Francisco organization and was asked to skipper Triple-A Fresno in 1998. He also served as the first base coach for San Francisco in 1996.

Following his coaching career, Davenport has spent most of his time in the San Francisco front office.

Davenport said the San Francisco organization has treated his family better than he could have ever possibly imagined.

“I owe the Giants everything,” said Davenport, who is the second-longest standing member of the organization. “They’ve been great to me and my family. It’s been a great relationship.”

Davenport, the brother of former Siluria mayor Harold Davenport, was inducted into the Alabama Sports Hall of Fame in 2006. The Thompson High School baseball stadium bears his name, along with a pizzeria opened in Mountain Brook in 1964 by fellow Thompson graduate Rex Hollis.

Davenport said he is honored to have his name attached to the Warriors’ baseball stadium.

“It’s a great honor,” Davenport said. “I had so many great years there. I’ll always thank them for what they’ve done for me.”

Davenport said he enjoys coming home to visit his family in Shelby County.

Davenport isn’t the only Shelby County connection on the Giants’ championship team in 2010. Starting pitcher Matt Cain, who was the winning pitcher in Game 2 of the World Series, spent part of his childhood in Vincent before his family moved back to Tennessee.